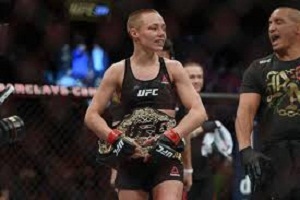 Strawweights will headline on pay-per-view for the first time at UFC 237.

A previously announced title fight between 115-pound champion Rose Namajunas and Jessica Andrade has been set as the UFC 237 main event, according to MMA Fighting.

UFC officials have not yet announced Namajunas vs. Andrade, the only title fight on the card, as the headliner. UFC 237 takes place May 11 in Rio de Janeiro, Brazil.

Most assumed a second title fight would be added to UFC 237 following the January announcement of Namajunas vs. Andrade. In fact, a women’s bantamweight title bout between Amanda Nunes and Holly Holm was briefly targeted for the event, but “The Lioness” needed more time to prepare for Holm, a former 135-pound champ.

Namajunas hasn’t fought since a narrow decision win over Joanna Jedrzejczyk last April. That was her first title defense after winning the belt with a first-round knockout of Jedrzejczyk in November 2017. “Thug” has been on the sidelines because of neck issues. She was also a victim in Conor McGregor’s bus attack ahead of UFC 223 and was traumatized from it.

Andrade has won three straight, with a September knockout of Karolina Kowalkiewicz and one-sided decisions over Tecia Torres and Claudia Gadelha.

UFC 237 also features a pivotal featherweight bout between former champion Jose Aldo and Alexander Volkanovski, as well as a middleweight fight between Jared Cannonier and one of the greatest MMA fighters of all time, Anderson Silva.