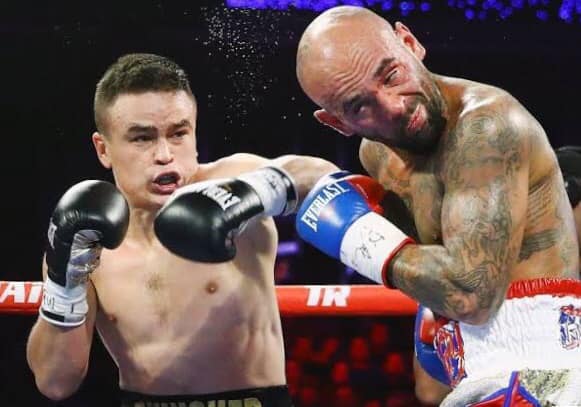 Sampson Boxing has announced the addition to its roster of fighters of unbeaten Uzbek welterweight 🇺🇿 Kudratillo “The Punisher” Abdukakhorov, currently the world’s # 1 in the IBF, # 13 in the WBO, and # 8 in The Ring Magazine.

The agreement between Sampson Lewkowickz and Abdukakhorov was signed into a multi-year promotional contract.

As an amateur, Abdukakhorov, 27, was a 4-time Uzbek national champ, completing his amateur career with an impressive record of 170-10. ⭐️

Later on, as a pro, the Uzbek warrior signed with legendary promoter Bob Arum and had his first two fights in the United States with Top Rank.

In October of 2019, the unbeaten “Punisher” earned the IBF # 1 rank by beating former world champ Luis Collazo in a clear decision; then he was scheduled in 2020 to rumble against tough Russian former monarch Sergey Lipinets. That would have been a great fight.

That fight against Lipinets was going to be for the interim belt (due to Spence’s accident), but the battle never materialized due to the pandemic and problems with Abdukakhorov’s U.S. visa.

After those inconveniences, the Uzbek fighter and Top Rank dissolved their agreement amicably, and now “The Punisher” wants to continue with Sampson.

“I am very excited to sign with Sampson Lewkowicz,” says Abdukakhorov.

“I have been mandatory for Errol Spence Jr for the last 19 months and I want to fight the best.

“Working with Sampson and with Premier Boxing Champions (PBC), I am sure I will get the fights that I hope.

Abdukakhorov’s manager Vikram Swapragasam, who is based in Malaysia, says that the move to Sampson Boxing will open new doors for his fighter.

“Sampson is a promoter who can give us opportunities to have more fights, and to work with PBC, which is where the welterweight champions are.

“I’ve known Sampson for years and he has a great reputation. He keeps his word,” Vikram added.

Meanwhile, Lewkowicz says that the plan is to give Abdukakhorov a keep-busy-fight around March, and after that, hopefully a battle against Spence Jr., or fight for the IBF interim championship, if the champion declines the fight.

“There will be many opportunities for this future champion from Uzbekistan,” Sampson Lewkowickz believes.

“His manager Vikram and I shared the vision of making sure that he shakes off any ring rust in his next clash; then get him in the fight of his dreams: a shot at the welterweight world title.

“He is a very skilled and strong fighter with the potential of becoming a star in one of the most competitive divisions in boxing,” added Sampson.

Photo of Kudratillo “The Punisher” Abdukakhorov (R) with his manager Vikram Swapragasam courtesy of Sampson Boxing.