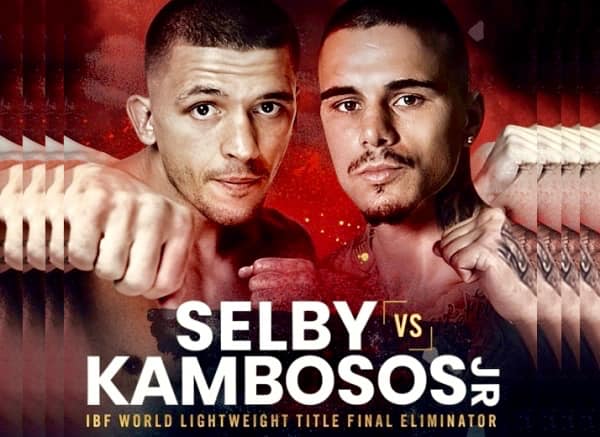 The IBF has informed in a press release that British promoter Eddie Hearn’s company Matchroom Boxing has won the right to promote the lightweight eliminator battle for the IBF # 1 world-rank between Welsh former world champion Lee Selby and tough Australian George Kambosos.

The statement from the IBF communicates that a purse bid for the fight between Kambosos (18-0, 10 KO’s) and Selby (28-2, 9 KO’s) was held last Monday at their headquarters in Springfield, New Jersey, USA.

The IBF # 1 ranking is supremely important as the winner inches closer to a shot at the IBF world title, a lifetime chance to riches & fortunes.

Things with COVID-19 are unpredictable, as fans we’ll know; however, the Selby vs Kambosos clash is scheduled for Saturday, October 3, at the Motorpoint Arena in Cardiff, Wales, UK, Selby’s home turf.

The more experienced Selby, 33, was the IBF featherweight world champ from 2015 to 2018, and now is battling as a lightweight, wanting to crush Kambosos’ unbeaten record.

Meanwhile, six years younger, Kambosos Jr., from Sydney Australia, is a former sparring partner of Filipino legend Manny Pacquiao, who needs so bad a win over Selby in Cardiff to keep on track his life goal to fight for the 135-pound world crown.

Will Lee Selby — fighting in his own homeland of Cardiff in Wales — display too much class for the visiting Kambosos, the Australian warrior is Greek ancestry?

Or will it be George Kambosos the one to emerge victorious with a sensational door-opening win over the local hero former world Champion?

The author Carlos Costa is a boxing writer living in Mabolo, Cebu.
Carlos can be reached on WhatsApp 09184538152.