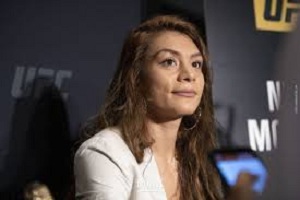 According to a report from The Sacramento Bee citing UFC officials, a bantamweight bout between Montano (4-2) and one-time title challenger Sara McMann (11-5) is one of several matchups that has been added to the upcoming UFC Sacramento card at Golden 1 Center on July 13.

This will be Montano’s Octagon debut at 135 pounds. Montano became the UFC’s first female flyweight champion when she defeated Roxanne Modafferi at The Ultimate Fighter 26 finale back in December 2017 to win a 16-woman tournament. During the course of the TUF 26 season, Montano also picked up victories over Barb Honchak, Montana De La Rosa, and Lauren Murphy.

Her title reign came to an unceremonious end when complications from a weight cut forced her out of her first scheduled defense against Valentina Shevchenko less than 48 hours before they were supposed to fight in the co-main event of UFC 228. Montano would be stripped of the title and Shevchenko later claimr it with a unanimous decision win over Joanna Jedrzejczyk at UFC 231.

Montano recently became eligible to compete again in March after testing positive for ostarine and receiving a six-month suspension from the USADA.

McMann, an Olympic silver medalist in wrestling, is coming off of back-to-back submission losses to Marion Reneau and Ketlen Vieira. Prior to those setbacks, the 38-year-old had won three straight.

In featherweight action, top-15 ranked Darren Elkins (24-7) will fight Ryan Hall (7-1). Elkins has lost two straight to Ricardo Lamas and Alexander Volkanovski on the heels of a six-fight win streak, while Hall is 3-0 in the UFC and hasn’t lost since his pro debut back in April 2006. “The Wizard” defeated B.J. Penn with a first-round heel hook submission last December, becoming the first fighter to submit the former two-division UFC champion.

See the updated card below: