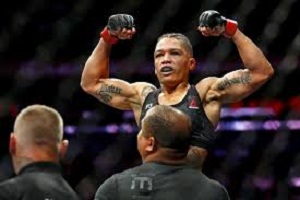 Sijara Eubanks is headed back up to 135 pounds.

“Sarj” is set to meet Aspen Ladd in a bantamweight bout at UFC on ESPN+ 9 on May 18 in Rochester, New York. MMAjunkie reported the pairing Thursday.

Eubanks and Ladd have already met once before. Ladd defeated Eubanks by unanimous decision at Invicta FC 21 in early 2017. That bout actually marked both athletes’ last official fight before signing with the UFC.

After losing to Ladd, Eubanks moved down to flyweight for The Ultimate Fighter 26, which decided the promotion’s inaugural women’s 125-pound champion. Eubanks made it to the finals of the show after a successful three-fight run in the house that included a win over Roxanne Modafferi, but she had to pull out of her December 2017 title fight against Nicco Montano due to weight-cutting difficulties. Since then, Eubanks has defeated Lauren Murphy in her official UFC debut and picked up a second win over Modafferi. But she missed weight for the rematch, prompting her return to bantamweight.

Only 2-0 in the promotion, Ladd has already made waves in the UFC. The 24-year-old beat Lina Lansberg in her Octagon debut in late 2017, and followed that up with a one-sided victory over former Invicta FC champ Tonya Evinger last October at UFC 229. A planned matchup with Holly Holm at UFC 235 later fell through.

Ladd has struggled to make weight herself, too. She was expected to face Leslie Smith last April, but missed weight for the 135-pound bout, and as a result of that, it was called off.

UFC Rochester takes place at Blue Cross Arena. No other fights have been announced for the card as of now.