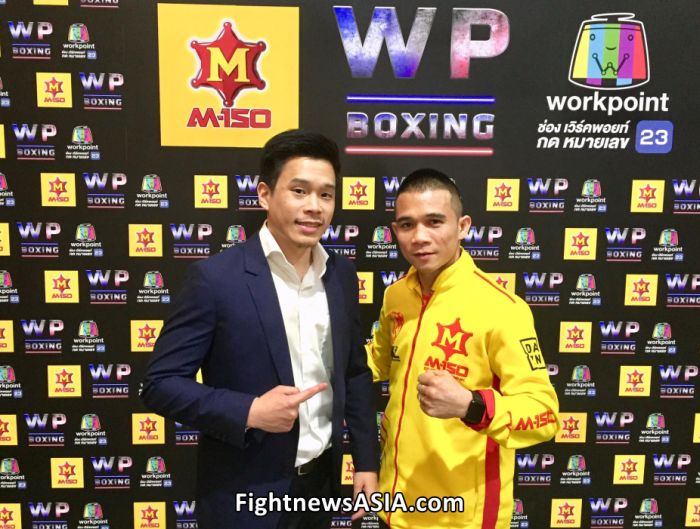 The quiet, yet lethal Srisaket (a.k.a. Wisaksil Wangek), was attending a boxing event promoted by his long-time manager Bank Pisitwuttinan, which unfolded with his stable-mate friend Thananchai Charunphak winning the WBC Asia Flyweight Title.

The Thai slugger Srisaket was at the televised card also promoting his own fight in Thailand set for May 2 at the same venue, Thailand’s Workpoint TV.

The show was originally scheduled for April 4 and is now rescheduled for May 2 due to the current situation with COVID-19 virus pandemic.

Incidentally, during the event attended by Srisaket, he and his manager Bank were interviewed for the live broadcast by Thai TV personality Matthew Deane.   Just days later, Matthew later tested positive for the novel coronavirus COVID-19.

It was later revealed that Matthew Deane, also an actor and a former fighter, was infected with the virus.

Matthew has been isolated at a hospital here in Bangkok and is recovering well; and thankfully, neither Srisaket nor his manager Bank, both young, fit men in their early 30’s contracted the treacherous virus.

Q: How are you, Srisaket?    We are living crazy times, yet when this BIG STORM is over, you intend to press your career forward.

Q: How are preparations for your coming fight here in Thailand?

A:   These times we are living are totally out of the ordinary, as if we are all inside a thriller movie.   But I continue my preparations for my fight.

Training continues going great with my long-time coach and my team.   I am scheduled to fight former world champion Amnat Ruenroeng right right here the Workpoint TV Studios in Bangkok.

[The Srisaket vs Amnat rumble is now rescheduled for May 2 due to the current situation with COVID-19 virus pandemic.  However, Workpoint TV could postpone it even further.]

Q:  Amnat is a Tough opponent for you, is he?

A: Yes, he is    We can never under-estimated any opponent.

Amnat is a former world champion for a reason.  I cannot take him lightly.    That’s why I am having a good training for Amnat.   So far it has been a good training camp with my old time coach and the same team that took care of me during the Super Fly fights.

A:   Yes, a complicated fighter, a highly confusing boxer.   Impracticable moves.   And he is orthodox and me a southpaw.   Plus, he is very popular here in Thailand.     Because he defeated (current champion Johnriel) Casimero.   Also, Amnat outpointed (former world champion) Zou Zhiming.  Amnat also decisioned the Puerto Rican (McWilliams Arroyo.)

He did.   Not an easy thing.   Amnat is surely a tough opponent for me.   I need to be well-focused and well-trained to beat him good.  My goal is to press my career forward with bigger fights, and my target is the trilogy with Estrada.

Q: (Question for Srisaket’s manager Bank, standing besides his boxer). That rematch Could Happen?

That is why for us, Srisaket’s May 2 fight against Amant’s fight is important.    We cannot overlook him.   We know Amnat has a lot of experience, and he is very well-respected by us and by the Thai fans.

Just as mentioned, he has good world class victoris.    And, he had two good wins last year: one against the current WBA’s #13 world contender, Karoon Jarupianlerd (44-9, 20 KO’s).

Plus, when there is are fast ‘n furious exchanges between a southpaw (Srisaket) vs an orthodox, anything could happen, even non-intentional headbutts.

We must be ready, fast and well-prepared.  We need this win because we aim for the Estrada trilogy.

Q:   Another of your former opponents, Roman “Chocolatito” Gonzalez (49-2, 41 KO’s), is back on top of the world, knocking out and dethroning Khalid Yafai to become a world champion again.    How do you feel about that?

We are proud of Chocolatito.    He is a great person and an awesome fighter.   He is doing much for boxing.       If the opportunity presents itself, it would be an honor to fight Chocolatito for a third time; though for now the man we want next is Estrada (40-3, 27 KO’s).

Q:   You and Estrada fought almost a year ago at the Forum in Inglewood, CA, with the Mexican scoring the win, taking your world title.

A:  Yes, and that is why I want the rematch… to get back the belt.

I know Estrada.  He is an excellent fighter in every way.   But I know I can beat him in the rematch, same as I overpowered Chocolatito in our rematch in 2017.     For that to happen, I will need to be in the best shape of my life.

Q: Thanks for your time, Srisaket, wish you all the best in your May 2 fight.    Stay healthy and safe.

The author Carlos Costa of Panama is a boxing reporter living in the Philippines.   Carlos can be reached at carlos512@hotmail.com and whatsapp +639184538152.