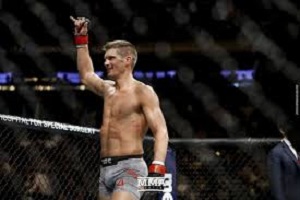 Stephen Thompson wants to guarantee that he is in full health when he returns to the Octagon following his knockout loss to Anthony Pettis at UFC Nashville in March.

“Wonderboy” made headlines for his reaction to the defeat. Hours after the event, Thompson shared his reaction to his first career knockout loss from the hospital, smiling as he praised the performance of “Showtime”.

Speaking on the latest episode of Eurobash, Thompson underlined that he feels the need to represent martial arts in a positive fashion, and as role model to hundreds of student under his tutelage in South Carolina.

“It’s just who I am as a person,” Thompson told MMA Fighting’s Eurobash podcast.

“I’ve never been knocked out before and I guess it was something that was bound to happen; if you’re in this sport long enough it’s bound to happen. And I think nine out of 10 times I would get the win, but that’s what makes this fight sport so exciting because you never know.

“I remember being in the hospital and my dad having me on Facebook live. I think everyone just wanted to know how I felt afterwards and I was all smiles, man. You get your ups and down, and normally I’m on the other side of that knocking my opponents out. Of course, it was bound to happen to me, but I’ve got 600 kids watching me at home and I wanted to set a good example for them as well. I wanted to let them know that they’ll have their wins and their losses, but you’ve got to take your licks as well and keep on moving forward.”

Thompson is known as one of the nice guys of the sport and insisted that people wouldn’t want to see him change his tune to join in on some of the more outlandish outbursts we see from some of his peers.

“I think that’s what being a martial artist is all about. You do have those guys that talk a lot. I understand they’re doing it for a reason, to hype a fight, but then you get guys who do it and you can tell that they’re trying to hard. I don’t think that’s [who they are] and people can pick up on that pretty quickly. If I started talking trash right now, people would just tell me to shut up, ‘That’s not you, Stephen—be quiet!’ [laughs]. That’s just not who I am.”

The former title contender insists that he is no rush to return to the Octagon following his first knockout defeat, having watched other fighters make the mistake of returning to early from such losses.

“It wasn’t so long since I was in the Octagon fighting, so I’m taking my time; I’m taking it slow. I’m 36 years old, I haven’t taken a whole lot of damage, but next time I get in the Octagon I want to make sure I’m 100 percent. I’ve known guys who’ve got knocked out and they get back in there too soon, next thing you know they get clipped and they’re out again. I just want to know that I’m fully healed and I’m taking the time that the doctors gave me to heal up, to make sure I’m 100 percent before I step back out there,” he said.

“Everything is good, I’m feeling great. A few weeks ago I had another CT scan and everything came up negative; everything was great. I just want to make sure I’m ready before I step back out there.”

Although Thompson initially hoped to return to action for his home event at UFC Greenville in June, he has ruled himself out of fighting on the card.

However, Thompson does hope to be action before the end of the year.

“There’s not really a date, but hopefully this year we’ll be stepping back out there. Maybe September or October. I would love to fight at Madison Square Garden again if that happens. There are a lot of opportunities, the year is not over yet, so hopefully you’ll see me back in there this year,” he said.