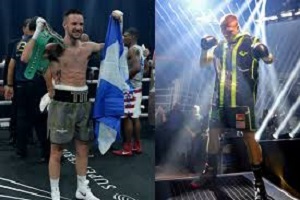 This Saturday in a World Boxing Super Series junior welterweight tournament semifinal from Glasgow, Josh Taylor has home field advantage against IBF junior welterweight titleholder Ivan Baranchyk, the celebrated prospect/contender Taylor’s first crack at a world title. Here’s a look at the fight, which will stream live on DAZN in the United States.

Baranchyk (19-0, 12 KO) is not the higher-ranked fighter, generally speaking, but he’s the incoming titleholder, as he’s got the IBF belt at 140 pounds. That will be on the line, as will Taylor’s WBC silver title, for what it’s worth — which if you have listened to Dillian Whyte is “nothing.” A spot against WBA titleholder Regis Prograis in the WBSS 140-pound final is also on the line.

How did Josh Taylor get here?

Scotland’s 28-year-old “Tartan Tornado” came to boxing from taekwondo at age 15, and in 2010 won silver at the Commonwealth Games as a lightweight, losing in the final to future Olympian Thomas Stalker of England. He did qualify for the 2012 Olympics at lightweight, though, and in London he defeated Brazil’s Robson Conceicao (who would win gold in 2016) in the opening round before falling to Italian Domenico Valentino in the round of 16. As a light welterweight, he won gold at the 2014 Commonwealth Games, sweeping the cards 3-0 in all five of his fights.

In 2015, he went pro, signing with Barry McGuigan. He ran through his first six foes, stopping everyone within two rounds, and then stopped Dave Ryan in five to win the Commonwealth 140-pound title in Oct. 2016. He made a trip to Las Vegas for his next fight, an eight-round decision win over Alfonso Olvera on the Frampton-Santa Cruz II undercard, then was back in Scotland for title defenses against Warren Joubert (TKO-6) and fellow unbeaten prospect Ohara Davies (TKO-7).

With really no more to accomplish with the Commonwealth title, Taylor set his sights elsewhere. He knocked out former lightweight titleholder Miguel Vazquez in nine, stopped Winston Campos in three, and then faced former 140-pound titleholder and still legitimate contender Viktor Postol in June 2018.

With Taylor established firmly as a serious player at 140, he entered the World Boxing Super Series, seeking further glory. In the opening round, he was matched with unbeaten but untested American Ryan Martin.

It was clear from the get-go that there was a major difference in class between Taylor and Martin. Taylor was every bit the fighter he’d been hyped to be, while Martin looked like an undercooked prospect who frankly had no business fighting at this level. Martin had zero answer for Taylor, failing to pull the trigger as trainer Abel Sanchez did his best in the corner to all but beg him to actually start throwing punches.

The final shot which caused the seventh round stoppage was a bit controversial, being that it landed behind the head, but it wasn’t competitive and wasn’t going to get any more so.

How did Ivan Baranchyk get here?

Born in Amursk, Russia, the 26-year-old Belarusian “Beast” Baranchyk was a decent amateur, winning the 2009 World Junior Championships, but has said that when training in his early days in the sport, he had no real trainer, and basically taught himself the sport.

“The man who ran the gym I went to was supposed to be the trainer but he had a drinking problem,” Baranchyk said in 2017. “Instead of teaching us the sport of boxing, he just opened the gym door each day and left us without steady guidance.”

In the end, Baranchyk didn’t compete in any major tournaments past the junior level of the unpaid ranks. He turned pro in March 2014 in Minsk, where he would have his first three pro bouts.

Baranchyk came to the United States for his Nov. 2014 fight in Baltimore, and has fought on US soil ever since. He fought in the New York scene in 2014-15, but it was in 2016 that he found his adopted hometown in the United States: Miami, Oklahoma.

Baranchyk made his debut in Miami in March 2016, knocking out Nicholas Givan in 21 seconds on ShoBox. His next five fights would all be held at the town’s Buffalo Run Casino, where he became a fan favorite. He defeated Eliseo Cruz Sesma, Zhimin Wang and Wilberth Lopez, then was matched with Abel Ramos in a ShoBox main event in Feb. 2017.

Ahead of the fight, Showtime producers asked promoter Tony Holden if he could move local heavyweight Kenzie Morrison’s fight into the de facto “main event” slot on the show, to go on after the Showtime cameras were off the air. They feared that if all the local fighters had already fought, the TV audience would see a bunch of empty seats for Baranchyk-Ramos.

Holden told them that wouldn’t be necessary, that Baranchyk had become a popular attraction in the city, and he was right. Baranchyk and Ramos put on a really entertaining fight, with both hitting the canvas (Ramos twice), and Baranchyk pleasing the fans who had grown to love him with a 10-round decision victory.

He had one more fight on ShoBox in July 2017, beating Keenan Smith, again in Miami. He was then half-graduated along with fellow rising 140-pounder Regis Prograis to a Showtime Boxing Special Edition card from Deadwood, South Dakota, in March 2018. On that night, Baranchyk routed former 140- and 135-pound title challenger Petr Petrov, putting his opponent down three times and stopping him inside of eight rounds.

Baranchyk then entered the World Boxing Super Series, matched against Sweden’s Anthony Yigit in the opening round last October in New Orleans. The vacant IBF title was also on the line.

Yigit, a 2012 Olympian, was game but just couldn’t deal with the power of Baranchyk, who turned Yigit’s left eye into a catastrophe, forcing a doctor stoppage after seven rounds with the eye completely shut, a swollen black mass.

Earlier this year, Baranchyk actually pulled out of the tournament, with his team citing issues with the organizers. It took a while, but Baranchyk reentered and will face Taylor as planned on Saturday. He’s now working with trainer Freddie Roach, having left Pedro Diaz.

How do the fighters match up?

Taylor will have some size advantages on Saturday, as he measures at 5’10” with a 69½-inch reach, compared to Baranchyk at 5’8” with a 67-inch reach.

Style-wise, Baranchyk is aggressive and a little wild, while Taylor is the more skillful of the two, though that doesn’t mean he lacks for power. His 86% KO rate is higher than Baranchyk’s 63%, and many feel Baranchyk has only the puncher’s chance.

Check back on Friday at Noon ET for our staff picks!