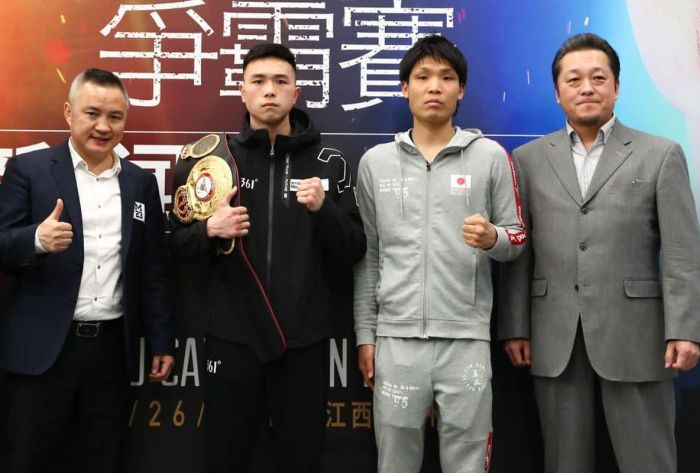 The fan-friendly Chinese Monster, a quick, coming-forward fighter who invariable aims at throwing his punches in combinations of three or four, faces stiff competition in the hard-hitting Japanese samurai from Kobe, a man wanting to become a two-division champion of the world.

Will the world champion from the Middle Kingdom Xu Can outbox and control the devastating power of the warrior from the Land of the Rising Sun? Or will Shun Kubo find his rhythm and precise timing to overpower the third boxing world champion born in mainland China… in his hometown?

In fact, in his last world title defense last July in Malaysia, the rough brawler from troubled Venezuela brutalized his unknown Chinese challenger Lu Bin, stopping him in the last second of the last round, sending him dizzy, bruised and beaten up to a Kuala Lumpur hospital. Lu Bin hasn’t fought ever since.

Could Cañizales do the same to a world-class pro as Sho Kimura? Or will it be the experienced laser-focused Nippon warrior Sho Kimura (木村翔) the one to deal the unbeaten Cañizales his first crushing defeat to become the new champion of the world at 108, after being champion at 112?

In addition, WBA world-ranked flyweight Wulan Tuolehazi (11-3-1, 5 KO’s) of China’s northwestern Xinjiang region defends his WBA # 3 ranking as well as his hard-earned WBA International Flyweight strap from the snick attacks of “The Filipino Jackal” Ardin Diale (35-13-4, 17 KO’s), a man of experience who wants so bad to be among the world’s best 112-pounders. This is his golden chance.

Will be able to seize the day? Fans in the Philippines call Ardin Diale “The Jackal” for a reason. Let’s find out what the “Jackal” can do against Wulan Tuolenzi, a fearless and glory-hungry Chinese warrior.

In another hot WBA title war, unbeaten 21-year-old Chinese featherweight Shichao Gao (3-0-1, 1 KO) in his 5th fight has been given the really tough mission of defeating the far more experienced world-ranked Anurak (23-1, 9 KO’s) of Bangkok, Kingdom of Thailand.

To many fans, at first sight, the battle seems kind of unbalanced with Gao still developing his skills as a boxer against , a more matured 27-year-old fighter who already fought for the world title (nearly three years ago).

Why this early risk?

Is Gao a hidden fighting diamond that his confident handlers know that we do not know? May 26 fans will find out. Anyways, this is boxing where risks are part of daily life. The two men will collide for the vacant WBA East Asia Super Featherweight Belt as well as a berth in the WBA 130-pound world rankings. May the best man win.