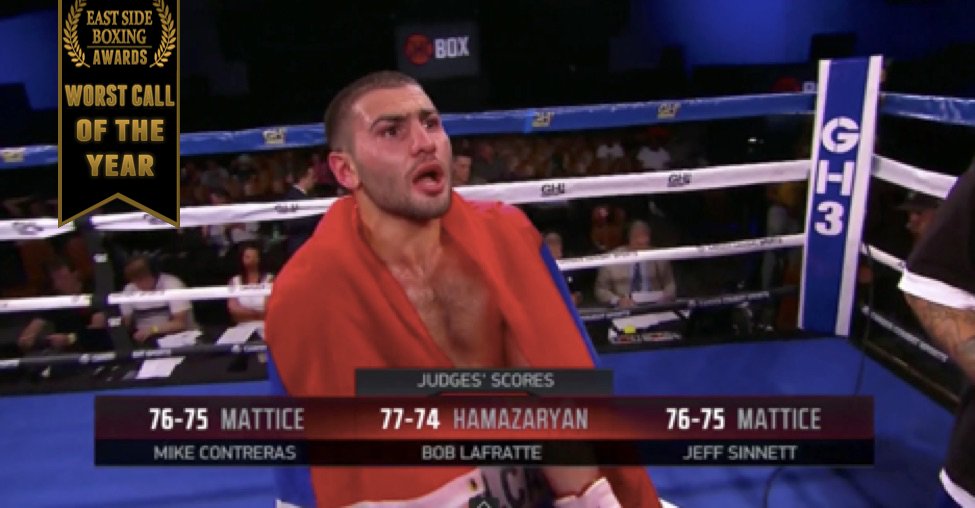 But nothing is more aggravating to die-hard boxing fans than a corrupt decision: boxing’s equivalent of a robbery.

The latter is precisely what we witnessed in a July bout between two undefeated prospects:

Hamazaryan floors Mattice in round 2, scoring the only knockdown of the fight. Photo © SHOBOX

From the opening bell, Hamazaryan brought the fight to Mattice, forcing the Ohioan to fight at an uncomfortable tempo.

In round two, Hamazaryan caught Mattice with the business end of a massive shot that dropped Mattice hard, scoring the only knockdown of the fight.

WORST DECISION OF THE YEAR

Rounds three and four were also Hamazaryan rounds, with round five qualifying as the only clear-cut round for Mattice.

Over the remaining rounds, Hamazaryan remained in control earning what virtually everyone believed was a hard-fought victory.

Therefore, it came as a shock when Mattice was announced as the winner—inexplicably given the victory by judges Mike Contreras and Jeff Sinnett (76-75, twice), with the lone dissenting judge Bob Lafratte scoring the bout in favor of Hamazaryan (77-74).

“[Mattice] didn’t win the fight, that’s all I can say,” said veteran scorer, commentator, and ringside reporter, Steve Farhood, who had it 78-73 in favor of Hamazaryan (see above).

“I have to say, I’ve been doing this for over 40 years,” Tompkins added, “[It’s] one of the worst decisions I’ve ever seen.”

We concur with Tompkins and Farhood.

And although Mattice and Hamazaryan would fight again in September, ending in a defensible draw, it was Mattice’s gifted “win” earlier in the year that continued to leave a bitter taste in our mouth worthy of top honors in this most dubious category.