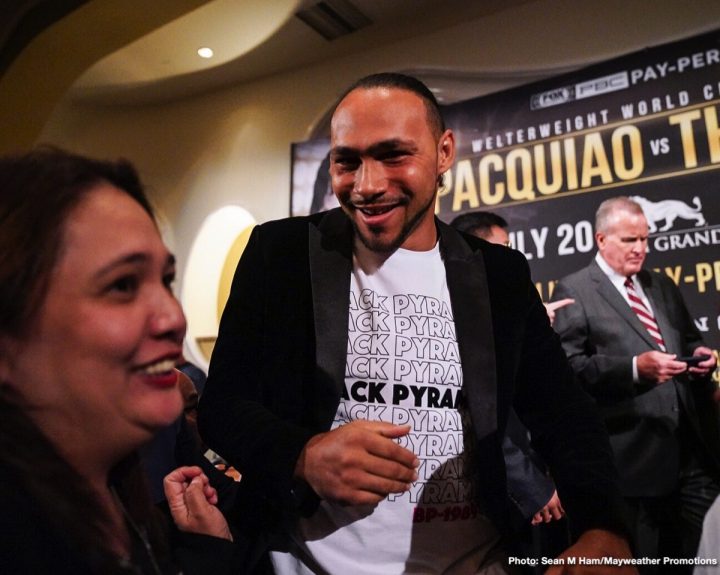 Keith Thurman is predicting that he’s going to pitch a shutout of Manny Pacquiao before he knocks him out on July 20, and sends him into a permanent retirement. Thurman (29-0, 22 KOs) says that Pacquiao’s lack of reach is going to doom him in their fight on Fox Sports PPV. Thurman sees Pacquiao as needing to leap in with his shots due to his reach disadvantage in the fight. Once the 40-year-old Manny starts leaping in to throw punches, he’s going to be countered, says Thurman. Initially, Thurman is predicting that Pacquiao (61-7-2, 39 KOs) will become cautious after he gets hit hard for the first time, but that’s not going to save him from being knocked out in that fight, according to Thurman.

“I’m fighting a living legend. I wanted Manny Pacquiao. I wanted Floyd Mayweather,” Thurman said. “I always knew I was going to have one of them. It was just a matter of time. He’s not going to be able to survive my skills, and my talent with everything I’ve got. My best life is knocking out Manny Pacquiao, not winning a 12 round decision, split decision, majority decision and a draw and a loss. We’re on a whole new level. I’m out of this generation. When I put Pacquiao on exit stage level, people will know that Keith ‘One Time’ Thurman is back, and the baddest boy in the welterweight division,” said Thurman.

A win for Thurman over Pacquiao will affirm in the minds of many boxing fans that the Filipino star is old at 40, and not the fighter that he once was a decade ago. But it won’t make the fan believe that Thurman is the best welterweight on the planet. For Thurman to have that honor bestowed upon him, he’ll need beat IBF welterweight champion Errol Spence Jr. (25-0, 21 KOs), WBC champion Shawn Porter (30-2-1, 17 KOs) and WBO champion Terence Crawford (35-0, 26 KOs). Beating Pacquiao doesn’t prove anything. Pacquiao lost to Jeff Horn and Floyd Mayweather Jr. recently.

“My size is going to be a problem. It’s not a weight-size advantage,”Thurman said. “It’s the overall reach advantage. Manny Pacquiao has T-Rex arms. I don’t know if you’e noticed that. He’s got little T-Rex arms. He had a hard time beating up Jeff Horn. You think he’s going to beat up Keith Thurman? Manny Pacquiao gets hit in the face all the time. Adrien Broner didn’t do it. I’m going to do it. I want him to remember what it’s like to be in against a real fighter, against a fighter like Erik Morales or [Juan Manuel] Marquez. I’m bigger than Marquez. I’m faster than Marquez. I’m an adaptive fighter. That’s what people don’t understand about Keith ‘One Time’ Thurman. I look at what you’re throwing at me. I look for your gimmicks. I look for your next gimmick. To me, he’s not touching me. He’s not landing anything with his T-Rex arms. He’s hopping in and out, and he’ going to get caught in the process. Not one round do I see Manny Pacquiao winning. He didn’t throw that many punches in his last fight [against Adrien Broner]. He didn’t throw a lot, did he? Did he throw a lot of punches in bunches? That’s something that happened years ago. When he had him on the ropes, he started to tee off on AB against the ropes. If I let him get me on the ropes, I think he’s going to feel more comfortable,” Thurman said.

It’s likely that Thurman will get hit a lot by Pacquiao if he doesn’t knock the Filipino star out early. Thurman got hit by the likes of Josesito Lopez, Danny Garcia, and Shawn Porter. Those fighters didn’t do anything special to hit Thurman other than come forward and pressure him. Even at 40, Pacquiao’s hand speed is better than those fighters’ speed. Thurman is going to get hit. He can say he’s not, but he’s kidding himself. The only thing that Thurman can hope is he doesn’t get nailed by too many hard punches, because he almost got knocked out by his last opponent Lopez. Pacquiao hits about as hard as Lopez, but he’s busier than him. As long as Thurman’s chin holds up, he should be fine. That’s the good news. What’s bad is Pacquiao has excellent boxing skills, and he’ll win rounds due to his popularity. If any of the rounds are close, you have to believe the judges will give them to Pacquiao.

“To me, Manny Pacquiao is not the same fighter. He’s a tremendous fighter, but ever since he got laid out [by Juan Manuel Marquez in 2012], he’s more cautious,” Thurman said. “I’m going to hit him with a reminder, and I’m pretty sure he’s going to be very cautious. Senators have got to thin, so after I hit him with that reminder, we’re going to see how he ends up fighting the fight. We’re in a new generation. Manny Pacquiao is done. I mean it when I say this is going to be Manny Pacquiao’s last fight. Oscar [De La Hoya] was the big name. I’m trying to make a name. That’s the whole premise of this fight. I’m going to build my legacy by ending his. That’s part of boxing. This is how it works. Sugar Ray [Leonard] was in the ring when he shouldn’t be. He took fights that he wasn’t supposed to. The difference is nobody told him not to take the fight. His footwork isn’t that spectacular. He’s hopping in and out. Why? Because he’s got to jump in with those T-Rex arms. He can’t really hit you. He can’t extend and utilize his reach. He has to jump in with the punch…When he’s jumping in, I’m countering. This isn’t a Floyd Mayweather counter. It’s a Keith ‘One Time’ Thurman counter. He’s a legend. He’s fought so many times. You can’t intimidate him, but I don’t need to intimidate him. You don’t have to be scared to be knocked out. You don’t have to be scared to get your ass whooped. Just show you, your as is going to get whooped. He’s never been in the ring with Keith ‘One Time’ Thurman,” Thurman said.

Thurman is saying that Pacquiao isn’t the same fighter he was in the past, but neither is he. Father time waits for no one, especially for fighters that sit out of of the ring for two years like we saw from Keith’s recent comeback fight against Josesito Lopez last January. That wasn’t a prime Thurman we saw in that fight. Thurman looked like he’d lost a few steps. There’s nothing wrong with that. As he said it himself, even 70%, he can beat 90% of the elite fighters in the welterweight division. But if Thurman can’t beat 10% of the top fighters at 147, then that puts him below Spence, Crawford, and Porter. Thurman is right at Pacquiao’s level right now. This could be a 50-50 fight.

“Of course, numbers don’t lie,” Thurman said when asked if he should be the favorite to beat Manny. “You want to bet against a dude that’s never lost against a dude that has lost seven times. Even as an amateur, you can’t show me where I got beat by someone that was beaten seven times. I think he thinks it’s the right time. They saw the dust [from Thurman’s performance against Josesito Lopez]. What they don’t understand was I was brushing off the dust. They saw the dust. It’s gone. There’s not going to be any dust come July 20th. Josesito Lopez, we brushed that off, baby. We took the hit. We showed you what real champions do. When you see Keith Thurman caught, when you see Keith Thurman hurt, what do you do? You don’t see Keith Thurman panic. You see Keith Thurman make calculated decisions,” Thurman said.