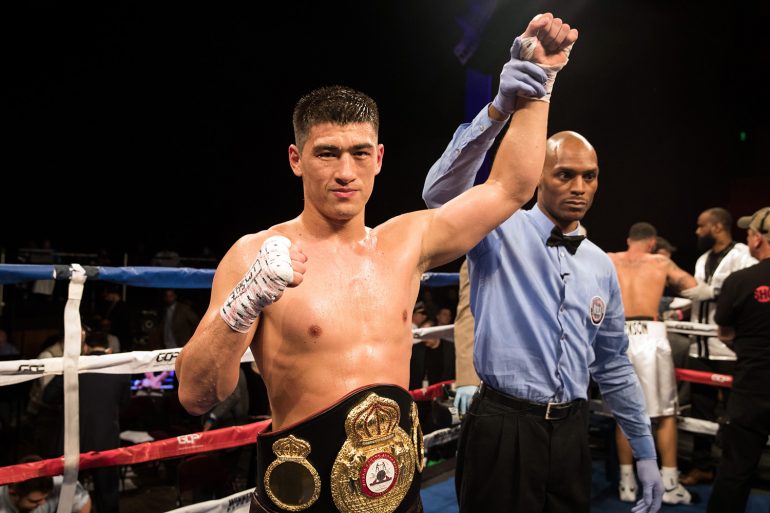 Friday, April 14 (continued): Boxing is a sport that translates well to daily life and one of the best life skills one can possess is the ability to create a positive first impression. It forms friendships; it helps secure employment and it allows us to overcome barriers that could have been stumbling blocks otherwise. In the ring, a great first impression helps fighters build fan bases, impress TV executives and enhances one’s ability to generate larger purses and fight on bigger platforms.

Although he is the WBA’s “interim” light heavyweight titlist and its No. 1 contender for Andre Ward’s “super” title, Dmitry Bivol entered his fight with Samuel Clarkson as a clean slate to most boxing fans. Yes, most of his bouts are available on YouTube but, even in this Internet-driven age, television still packs the biggest punch, as far as creating and driving a narrative. Going in, I perceived Bivol to be a long-distance “points” boxer with sneaky power, going up against his best opponent to date. However after witnessing his fourth round TKO win (and compiling his punch stats), my picture of him is more complete.

From nearly the first moment, Bivol was utterly dominant. A lead right to the pit of the stomach 24 seconds into the fight caused Clarkson to retreat toward the ropes, where a combination capped by a hook above the ear suddenly scored the first knockdown. As he rose, Clarkson’s face was creased with pain and it was likely caused more by the body shot than the punch to the temple. Once referee Harvey Dock allowed the action to continue, Bivol pursued the stoppage but, in doing so, he remained within his envelope. Clarkson did his best to ride out the storm but, shortly before the two-minute mark, a sharp jab to the solar plexus set up a right to the point of the chin that folded Clarkson like an accordion.

The fight looked all but over because Bivol still had 45 seconds with which to work. Again, Bivol fired impressively fluid up-and-down combinations and never seemed out of control while Clarkson drew upon every survival skill to make it to the bell.

Manager Vadim Kornilov declared that “a new star was born tonight,” and that much is true. The post-fight talk was a potential match with WBA “regular” titlist Nathan Cleverly, who dethroned longtime titlist Juergen Braehmer in Germany last October. The styles should make for a compelling action fight and, while “Clev” will be tough to beat in the U.K., his leaky defense will give Bivol plenty of openings to exploit. Let’s hope this fight happens sooner rather than later.

The Bivol-Clarkson scrap topped an action-packed telecast, which began with Baltimore super bantamweight Glenn Dezurn Jr. winning an eight-round unanimous decision over Leroy Davila. A notable scene unfolded after both fighters entered the ring: Claressa Shields led the cheers for Davila while Franchon Crews, who Shields defeated on points in her pro debut, stood in solidarity with Dezurn Jr., her husband and frequent sparring partner, in the opposite corner. I didn’t see any byplay between the two but the dynamic was still noteworthy.

Davila’s movement and sharp southpaw counters earned him a slight edge in the first two rounds (32-28 overall, 31-25 power) while Dezurn’s pressure and superior body punching carried rounds three through five (84-51 overall, 79-47 power). The pair swapped evenly in rounds six and seven (Davila led 50-45 overall and the pair tied with 42 power connects) to set up the eighth, which, given its swings, was a microcosm of the previous seven, though the order of the momentum changes was reversed. Dezurn took the first minute 14-9 while Davila surged in the second minute (14-2). The final 60 seconds were pulsating but, in the end, Dezurn went 12 of 34 to Davila’s 8 of 25 to cut Davila’s lead to 31-28 in the round but preserve his statistical advantages for the fight (185-164 overall, 173-150 power). Several observers believed Dezurn-Davila would be the most competitive fight of the telecast and those observers were proven right.

As mentioned in Part One, Malik Hawkins was originally scheduled to face the vastly more experienced Taras Shelestyuk, a fight I was told Team Hawkins was eager to take. However that fight fell through, as did Hawkins’ first substitute opponent in the 18-0 Juan Ruiz. On this night, Hawkins faced Carlos Soto, who was fighting for the second time in 70 days following a 30-month layoff, had missed the contracted weight by a pound-and-a-half and was facing his first undefeated opponent with double-digit wins.

As expected, Hawkins was in command every second of the fight. His right hands landed frequently enough to swell Soto’s left eye nearly shut by the final minute of round one. The final moments saw Soto take a voluntary knee without being hit, capping a round in which Hawkins led 24-19 overall and 20-9 power.

Excellent corner work by Ulisses Ruvalcaba dramatically reduced the swelling but it only allowed Soto to see Hawkins’ incoming even better once the second round started. Hawkins battered Soto with right crosses and right uppercuts throughout the session and, in the final minute, Hawkins landed 15 punches to Soto’s one. In all, Hawkins went 39 of 92 overall (42%) and 32 of 62 power (52%) in the second to Soto’s 15 of 57 (26%) overall and 11 of 42 (26%) power. Following an examination between rounds, the ringside physician stopped the contest and declared Hawkins the TKO winner.

The stats illustrated the degree of Hawkins’ dominance, as he led 63-34 overall and 52-20 power (off-setting Soto’s 14-11 lead in jabs) as well as 38%-26 overall and 48%-24% power. Hawkins looked good but is he good enough to take on Shelestyuk? Maybe but I think that fight would be better accepted sometime next year. After all, the 21-year-old has plenty of time to sharpen his craft.

As I weaved my way out of the ringside area I ran into Marc Abrams, one of our sport’s hardest working and most versatile people. Writer, publicist, broadcaster and website owner are only four of his titles and, best yet, he’s a terrific person. My only regret is that I didn’t have more time to chat with him, for he is a font of insider knowledge.

Andy’s Garmin GPS guided us back to the Sheraton and, thanks to the brevity of the card, the process of entering the data into the master database was completed quickly. Knowing I needed to arise in a few hours, I decided to delay the writing session and turn out the lights shortly after 2 a.m.

Saturday, April 15: Following five-and-a-half hours of better-than-average slumber, I managed to get in a few rounds on the laptop. The word flow was so smooth that I nearly lost track of time; my goal was to be packed by 8:45 a.m. in order to catch the 9 a.m. airport shuttle but, before I knew it, 8:45 had already arrived. I quickly shut down my laptop, stowed my final items, took the elevator downstairs, settled the hotel bill and arrived at the shuttle pickup point by 8:55.

As it turned out, I was the only passenger inside the van, and, as is my wont, I engaged the driver in a lively boxing-oriented conversation. I quickly learned he was old-school, in terms of how a winner should be determined, for he believed a title should change hands only after the champion is decisively beaten. That was the way the boxing world operated through the early-1980s and, while many modern fans decry razor-close title-changing verdicts, the old way didn’t yield better results, in terms of controversial decisions. The only difference between now and then is past fights heavily favored defending champions instead of challengers, who may or may have done just enough.

For me, today’s way is better. After all, the results of all the other major sports are often determined by a single point, goal or run. Why not boxing? A challenger shouldn’t have to bludgeon a champion in order to reach his personal summit. It’s not fair to either the challenger, who was unjustly denied his dream or the battered but still victorious champion because the beaten champ who may have unfairly kept his title due to political considerations now will have to defend the belt against another top fighter whom may administer a similar beating. For evidence, just look at Muhammad Ali’s second reign.

Many believe Jimmy Young did enough to take Ali’s title on April 30, 1976 in Landover, Maryland (see the geographical link?), but because Young fought too defensively, in many eyes, Ali was given enough rounds to keep his belt. After Ali stopped Richard Dunn to register his 37th (and final) knockout win, he faced Ken Norton for the third time. In many eyes, Norton should have won the championship but Ali’s star power (and final round performance) allowed him to escape once again. Four months after Ali easily outpointed Alfredo Evangelista, Ali fought Earnie Shavers, who hurt Ali badly in round two and landed more punches over the 15-round distance. Once more, Ali finished strongly, nearing knocking Shavers out in the final moments and paving the way for a unanimous decision win. Nearly five months after Ali beat Shavers, Leon Spinks, a green but hungry 24-year-old Olympic champion, feasted on the scraps of a bloated, battle-worn Ali and produced one of boxing history’s most startling upsets.

Had today’s judging sensibilities been in play, Ali may well have lost the title to Young and might have been spared a lot of the punishment that followed, which included Ali’s final two fights against Larry Holmes and Trevor Berbick. Maybe he would have fought Young in a rematch and, if sufficiently motivated, he might have had enough in the tank to become a three-time champ anyway. But we’ll never know.

It has long been written that there is no more subjective task in sports than scoring a boxing match. It was true then; it is true now and it will be true until the end of time. All that can be done is to ensure that those charged with rendering verdicts are as well-trained and motivated by integrity as possible.

I cleared security seamlessly and had no trouble finding Gate 35X, which, at DCA (the abbreviation for Ronald Reagan Washington National Airport), is the waiting area for dozens of flights. Once my flight is called, I and my fellow passengers take an escalator down one level to a number of gates. Once our tickets are scanned, we then board a bus that takes us to our aircraft.

Thanks to my frequent flier status, I was seated in row four and, while the plane left the gate a bit later than advertised, I landed in Pittsburgh at 12:30 a.m., a full 18 minutes earlier than scheduled. The drive home was thoroughly enjoyable as I listened to various Sirius XM stations and marveled at the ease with which the new Subaru Legacy handled the steep climbs. I pulled into the driveway shortly after 3:30 p.m., closing the curtain on yet another Travelin’ Man adventure.

It was a trip so nice that I’ll get to do it twice, for my next journey will take me back to Oxon Hill, Maryland, in five weeks’ time. There I will work a “Showtime Championship Boxing” card topped by the long-delayed Gary Russell Jr.-Oscar Escandon WBC featherweight title match and supported by an attractive crossroads encounter between Andre Dirrell and Jose Uzcategui.

Until then, happy trails!