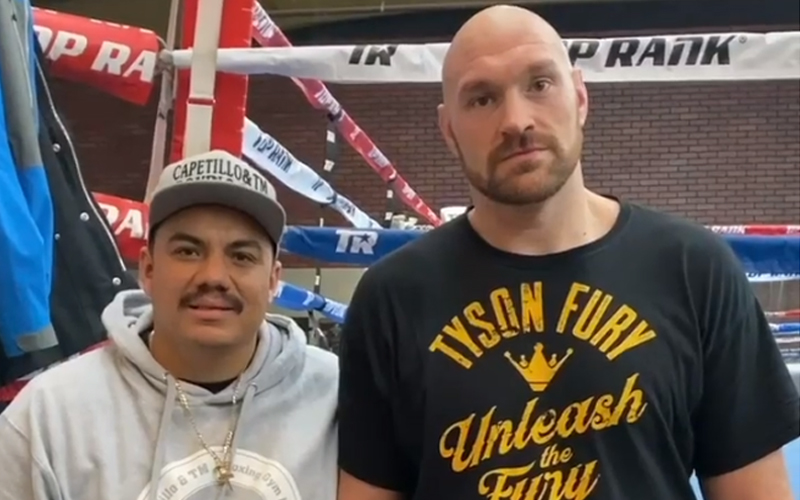 Tyson Fury, more than a champion

WBC World Heavyweight Champion, Tyson Fury has made Las Vegas his second home. Although he hasn’t been back since his victory in February against Deontay Wilder, he hasn’t forgotten his friends during this pandemic. Jorge Capetillo, who was Fury’s cutman for his fight against Otto Wallin, had to close down his gym, Capetillo & TM Boxing due to pandemic. Not only that, but all the fights he had scheduled as trainers were also canceled. Capetillo was worried as to how he would not only be able to provide for his family, but also keep paying the rent and expenses for the gym. Not long after Quarantine began, Capetillo received a text from his friend, Tyson Fury, who immediately asked how his family was healthwise and financially. When Fury found out Capetillo had to close down due to Covid-19 regulations, he asked, “What can I do to help?” The Capetillo family was grateful for Fury’s generosity, being in another country, and still worrying about them through this crisis. Fury gathered up some money and is still taking care of Jorge Capetillo and Family.

Fury’s acts of kindness are not out of the ordinary though, earlier this year during training camp for his fight against Wilder, Tyson Fury found out Capetillo’s gym was in danger of closing due to low memberships. Fury took it upon himself to hold a FREE Meet & Greet at Capetillo’s Boxing Gym for the fans. Thanks to that random act of kindness by Tyson Fury, they were able to raise enough money to keep the Boxing gym open. These stories are only a couple of things Fury has done during the pandemic. The current Heavyweight Champion and his wife have shown true leadership during Quarantine by helping so many through their social media. He is a true example of what a Champion is inside and outside the ring and WBC is extremely proud of him.

Currently Jorge Capetillo had to close his Boxing gym once again now due to testing positive to Covid-19. WBC spoke to the Capetillo Family and were told he is recovering well at home. We are keeping the entire family and gym members in our prayers.