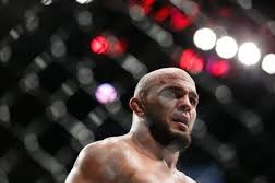 The UFC already has a light heavyweight bout as the headliner for its Stockholm card on June 1st, but there are two more high-profile 205 lbs matchups on tap for the event.

ESPN’s Brett Okamoto says that former title challenger Volkan Oezdemir is slated to face Ilir Latifi, while veteran Jimi Manuwa will battle rising prospect Aleksandar Rakic. No official announcement has been made, but it’s expected to be made soon.

Oezdemir (15-4) is in must-win territory, as he’s dropped his last three fights. “No Time” lost his title bout vs. Daniel Cormier by TKO, then was choked out by Anthony Smith, and most recently dropped a split decision to Dominick Reyes at UFC London earlier this month. Latifi (14-6, 1 NC) is also looking to get back in the win column, as Corey Anderson got the better of him at UFC 232 in December. The popular Swede’s most recent win came in February of 2018 against Ovince Saint Preux, whom he choked unconscious in the opening round.

Much like Oezdemir, Manuwa (17-5) is also on a three-fight losing skid. The knockout artist was knocked out by Thiago Santos in a thriller at UFC 231, as well as by Oezdemir at UFC 214 in July 2017. His other defeat came by decision vs. Jan Blachowicz last March. Rakic (11-1) is an up-and-coming talent out of Austria who’s won all of his fights since dropping his pro debut. The 27-year-old is 3-0 in the UFC, winning decisions over Francimar Barroso and Justin Ledet, before a TKO finish of Devin Clark at UFC 231.