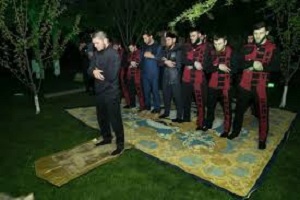 On Saturday evening, UFC champion Khabib Nurmagomedov accepted an invitation to attend an iftar (evening meal) with Ramzan Kadyrov during the holy month of Ramadan. The invitation came amidst reports accusing the Chechen dictator of reigniting the crackdown on the republic’s LGBTQ+ community.

Nurmagomedov, who last defended his lightweight title against Conor McGregor at UFC 229, reposted a video from Kadyrov’s Instagram account, along with the caption: Yesterday, at the invitation of Brother Ramzan Kadyrov, I visited him at iftar. Thank you very much Brother. I was very glad to see you and all the other Brothers. May Allah accept your deeds and good intentions.”

The UFC champion attended the iftar alongside his cousin and fellow MMA fighter Shamil Zavurov, as well as a handful of fighters who represent the MMA fight club funded by Kadyrov, Akhmat MMA. Nurmagomedov reportedly discussed his upcoming plans, led a prayer for Kadyrov and the fight team, and gifted the dictator with a pair of sneakers.

Nurmagomedov’s recent meeting with Kadyrov comes in the wake of reports that Chechnya has reignited its anti-gay purge by detaining several men and women on suspicion of being gay. Several detainees reportedly died under torture. The accusations of state-sanctioned violence against gay Chechens comes less than two years removed from the 2017 crackdown on Chechnya’s LGBTQ community, where over 100 gay men were detained and subjected to torture. Three of these victims allegedly died in extrajudicial killings during interrogation.

The Novaya Gazetya, an investigative outlet which was the first to report on Chechnya’s anti-gay purge in April 2017, confirmed the reports of renewed persecution against the LGBTQ community in Chechnya, though Chechen officials were quick to reject the reports as “disinformation.” U.S. based organization Human Rights Watch (HRW) later released a detailed report on the renewed crackdown, which included interviews with several men interrogated and tortured by the police. An excerpt is available below:

“They screamed at me. One of them started kicking me, I dropped to the floor, flat on my stomach… Another one then beat me with a stick, from the waist down, he was hitting me very hard for some five minutes. Then they made me kneel on the floor and put metal clips on my thumbs [the wires were hooked to a device delivering electric shocks], he turned the knob [of the device], first slowly and then faster and faster… With every turn, my hands bounced up and excruciating pain went through them… He stopped when I screamed my heart was about to burst. They took the clips off and my hands were heavy and felt dead.”

Despite these harrowing reports, Nurmagomedov continues to enjoy a friendly relationship with Kadyrov. Following his submission victory against McGregor, Nurmagomedov attended a celebratory dinner with the dictator in Grozny before being made an honorary citizen of Chechnya, the same political stunt that Kadyrov had used on Liverpool and Egypt superstar Mohamed Salah during the 2018 World. The warlord also gifted Nurmagomedov a brand new Mercedes to celebrate his win against McGregor.