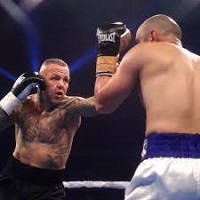 Last month, it was announced that UFC veteran Ross Pearson had retired from mixed martial arts competition and would be making a transition to the boxing ring.

Pearson, who fought under the UFC banner for over nine years, retired from MMA with a professional record of 20-16 (1 NC) and, as of today, The Ultimate Fighter 9 winner is 1-0 as a professional boxer.

‘The Real Deal’ fought Salar King (5-10-0) in his boxing debut earlier today on the undercard of the super welterweight fight between Tim Tszyu and Joe Camilleri at The Star in Sydney, Australia, finishing the journeyman via second-round TKO.

Ross Pearson gets it done in two rounds!

Former UFC star @RossTheRealDeal scores a 2nd round KO over Salar King in his boxing debut #TszyuCamilleri2495:47 PM – May 15, 201974 people are talking about thisTwitter Ads info and privacy

Pearson, who hails from Sunderland, England, fought primarily as a striker in MMA and will look to ‘conquer the sport’ of boxing with his slip and rip style.

“I was a stand-up fighter in the UFC and I know that means I can handle it in boxing,” Pearson told foxsports.com.au prior to the bout. “After fighting in the UFC for many years, I fear no man — this won’t be a one off appearance like Conor McGregor. I aim to conquer the sport by destroying anybody that steps into the ring with me.”