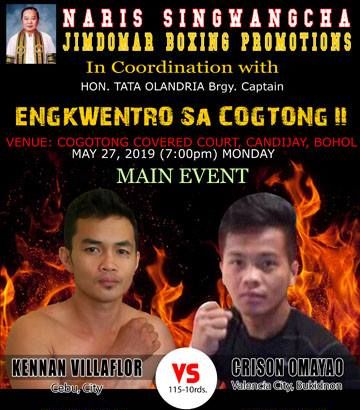 
After an exciting card in Bohol just a few days ago, boxing continues in rock n’ roll mode in the popular Visayas sun-bathed paradise island.


CO-FEATURE: SASAN AND MANINGKIL BATTLE IT OUT AGAIN

The two men already battled it out hot in an exciting non-stop 2017 war in Talibon, northern Bohol.

In the climax of that first war, Roldan stopped Dave in the eighth and final round, and now the way to do it again.   Yes, on May 27, Dave Maningkil will be having his much-requested re-match.

Will the younger Roldan Sasan stop Dave Manigkil again in for another thrilling knock out win?

Or will a better prepared Dave Manigkil made good use of his mental strength to shock and defeat Ronald Sasan for a rewarding victory?

Moreover, Bukidnon featherweight Angelito Merin (10-10-3, 4 KO’s) trades leather against dangerous Reymond (6-3 2 KO’s) of the beautiful coastal town of Dalaguete in southern Cebu.   Merin, 29, and , 26, will box in a scheduled eight-stanza war in the 126-pound division.

The entertaining “Engkwentro Sa Cogtong II” on May 27 in Candijay, eastern Bohol, is an effort of Edgar Lacierda Ricafort of Jimdomar Boxing and veteran man of boxing Naris Singwancha of Thailand in coordination with Candijay’s Barangay Captain Hon. Tata Olandria.

The first fight for “Engkwentro Sa Cogtong II” in Candijay starts at 7 PM.

.
The author Carlos Costa is a Panama boxing reporter living in the Philippines.   Carlos can be reached at carlos512@hotmail.com and whatsapp/Viber/wechat:  +639184538152.