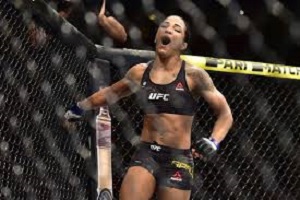 RIO DE JANEIRO, Brazil — Viviane Araujo made the most of her Octagon debut on Saturday night.

The Pancrase strawweight champion agreed to replace Melissa Gatto against bantamweight Talita Bernardo on four days’ notice at UFC 237 in Rio de Janeiro, Brazil, and dominated the action before delivering a vicious one-punch knockout in the third round.

Fresh off an “impressive debut” in the UFC, a finish she considers one of the five best knockouts in women’s bantamweight history, Araujo doesn’t know where she stands in the strawweight rankings, but would love to make her return to 115 pounds against a ranked opponent.

“Since they called me on such a short notice, I haven’t thought about rankings yet,” Araujo said after the win. “But since I fought a top 15 bantamweight, and I’m a strawweight, maybe I’ll fight someone in the top 10 of the bantamweight… No, strawweight division [laughs]. It’s still confusing [laughs].”

Araujo plans on taking a short break from training before she gets back in action, but plans on fighting again “as quick as possible so I can put on another show for the fight fans.”

“My weight class is strawweight, that’s where I feel comfortable,” Araujo said. “The girls at strawweight better take care of themselves now, Vivi is coming to blow the roof off.”