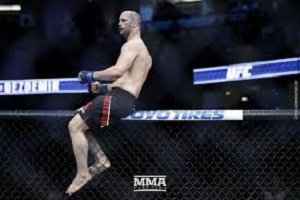 Jones’ return was successful, as the former champ not only regained his 205-pound title, but also became the first man to stop Cormier in an MMA contest.

Yet, despite putting away the ultra-tough Cormier in the third round of his return fight, Oezdemir wasn’t fully impressed with what he saw from Jones that night in the Honda Center.

“That was Jon Jones, that was his style, he was doing his stuff, but I didn’t see any new weapons,” Oezdemir said on Monday’s edition of The MMA Hour. “Of course, he probably didn’t get to display everything and yeah the fight was dominant, but DC had some good moments too. So you know, I wasn’t that impressed.”

There were many questions entering the UFC 214 main event and many were centered around how Jones was going to look upon return, as some believe Jones didn’t fight like himself on his first return to the Octagon back in April, 2016 against Ovince Saint Preux.

It was also talked about in the buildup for the Cormier rematch, that Jones had been sharpening his jiu-jitsu skills, having been promoted to jiu-jitsu blue belt during his camp and having prepared for a grappling match, which he won, against former Olympic wrestler and UFC fighter Dan Henderson at Submission Underground 2 last December.

Although Oezdemir admits it was a good fight, the Swiss fighter, who’s ranked third in the division, wasn’t impressed with Jones’ performance because he didn’t see any new tools or anything different from his part.

“The fight was great, of course, but I was waiting to see Jon Jones fight different,” Oezdemir explained. “D.C. is also one of the best pound-for-pound fighters ever, so it was also a fight between two of the best guys, so that’s why I guess.”

In the first round of the Jones-Cormier rematch, Cormier was able to land an uppercut on Jones that sent the his mouth piece flying through the air. Oezdemir, who knocked out top contender Jimi Manuwa earlier that night in Anaheim, is confident things would have gone differently if he was the one throwing that uppercut on Jones.

“I think it’s very different power, D.C.’s stance is not made for striking,” Oezdemir said. “The way he stands, he’s not going to be able to generate a lot of power in his striking, so this would’ve been different. I have another style, I offer another style for Jon Jones, so when my punch lands, it’s going to be different.”