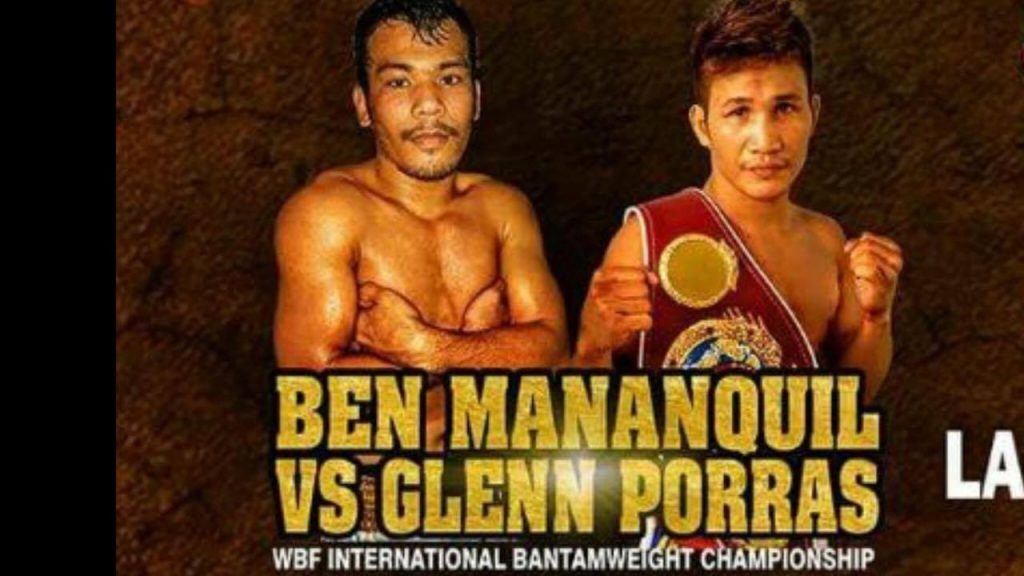 THE World Boxing Federation (WBF) is now getting stronger here in the Philippines with the staging of three championship fights on February 26 at the Lagao Gym in General Santos City.

Promoter Dexter “Wang Yu” Tan of Sanman Promotions said this is the biggest card with three WBF titles at stake in just one night in the “Laban Pinoy 3: Rise of Champions” to be presented by the Sanman Promotions and Solar Sports.

Dela Torre, who is now based in Miami, USA is the former WBF World super featherweight champion while Plania is the ex-WBF International bantamweight title-holder.

WBF was originally established in early 1988 in Bristol, Tenneessee (USA) by its founder and inaugral president Larry Carrier, who was popular as the owner of the Bristol International Raceway. Being successful in a multitude of sports enterprises, Carrier had noted the failures of the existing autocratic sanctioning bodies and that gave the impetus to establish the World Boxing Federation.

In the following year, the WBF held its first championship bouts and Carrier passed on the presidency of the organization to Ron Scalf, who had been his partner from the start. In 2005, Carrier passed away at the age of 82 after a long illness, though his influence on the sport of boxing is still felt to this day.

Under Ron Scalf, the organization blossomed and the WBF grew into a global sanctioning body and held title bouts all over the world. The 90ies was without a doubt a most successful decade for the WBF so far and laid the foundation for its good reputation.

In 2003, Scalf resigned as president and the organization faced troubled times. From 2003 to 2004, Londoner Jonathan Feld tried to rescue the sanctioning body and acted as its president from England. However, despite huge efforts, he was ultimately not successful and forced to step down when the original WBF company was finally dissolved.

After a five-year interregnum period, during which an obscure private entity used the letter acronym to sanction boxing bouts, by the end of 2009, the World Boxing Federation was finally re-established under its original name as a non-profit sports organization properly registered in the state of Luxembourg.

South African Howard Goldberg, from Cape Town, an experienced boxing administrator for many years, assumed the position of president, with former president Ron Scalf lending his support for the first half year in the position as vice president.

In over six years since, the re-founded WBF has sanctioned over 330 championship contests in 40 countries worldwide, regaining and actually exceeding its former status and became one of the most well-established sanctioning bodies in professional boxing today.