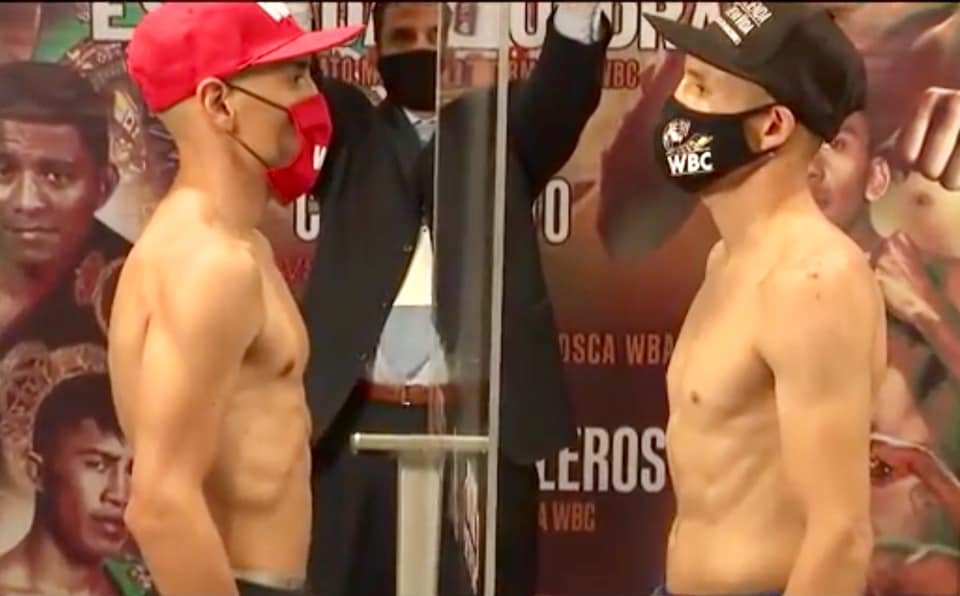 Ciudad de México will be the center of attention in the boxing world tomorrow Friday (Saturday morning here in Asia) when 2 world championships are disputed, and 3 of the world’s top fighters in the lower weight divisions will see action in awesome fights that promise to be exciting and competitive.

The official weight ceremony was held yesterday with all boxers looking and in terrific shape.

Estrada and Cuadras both weighed-in @ 114.5 pounds – half a pound under the division’s the limit, which speaks to the excellent preparation and conditioning that the 2 warriors will bring into the ring,

It is clear that the champion Estrada and the challenger Cuadras will enter the ring in excellent physical and mental condition, ready to deliver a great show.

But who of them possesses the toughest winning mentality? That is key.

Considered one of the strongest world champions today, Juan Francisco “El Gallo” Estrada (40-3, 27 KO’s) will make the 2nd defense of his WBC Super Flyweight World Championship against former champ Carlos “Príncipe” Cuadras (39-3-1, 27 KO’s), a battle that could possibly unfold with alternate dominance between the fighters, similar to the war that they fought 3 years ago.

Will that happen again, or will one of them be far more commanding?

On that first war in Carson, California, 🇲🇽 Estrada and 🇲🇽 Cuadras provided a great show to fans, statistics indicating that “El Gallo” connected on average more than 26 blows per round; of them, almost 21 of power.

In fact, the 3 judges delivered identical scores of 114-113, meaning that each boxer won 6 rounds.

The major difference was that in the 11th round Estrada knocked down Cuadras to the canvas, which prompted the chapter to be scored 10-8 in favor of “El Gallo.”

That additional point sealed the victory for “El Gallo” Estrada. By 1 point only. Wao, will something like this happen again?

Estrada has assured in interviews that his dominance will be more forcefu because of his better preparation at high elevation, and because he no longer has injuries in his hands. We’ll see.

“I feel good, El Gallo Estrada said. “I have won the first battle with the scale. Then, tomorrow will be the war, and I will win again,” said the Sonora world champion Estrada, one of the world’s top pound4pound boxers.

Meanwhile, the challenger Cuadras promised to his many fans that this time he will control Estrada with superior talent and skills.

“I am ready,” shared “El Príncipe.” I have been in weight with time. I come at 100% in every level; and tomorrow I will take revenge against Estrada, and yes! it will be another war between Mexicans,” said the Sinaloan former champ Carlos Cuadras.

The show will unfold behind closed doors, following protocols from the health authorities of Ciudad de México and the World Boxing Council.

In the co-feature, Nicaraguan World Champion star Román ”Chocolatito” González and Mexican challenger 🇲🇽 Israel González both made identical 114 pounds ahead of their war for the WBA Super flyweight world title.

It would be fan-friendly and awesome to see Estrada vs Chocolatito in 2021. But for that, they both have to emerge victorious tomorrow. Will that happen?

The exciting event will air live on DAZN and ESPN Knock Out.

Promoters for the show are Promociones Zanfer and Matchroom.

EXPECTATION TO THE MAXIMUM LEVEL.

A HISTORICAL NIGHT FOR MEXICAN BOXING.

Estrada vs Cuadras, and Chocolatito vs González in super flyweight action. May the Best Men Win