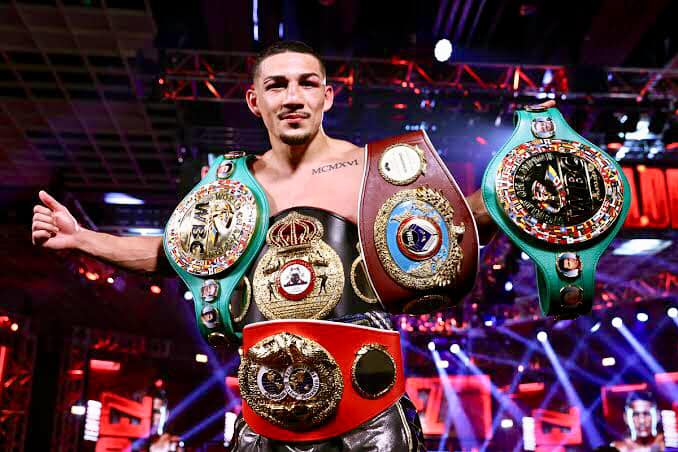 Who Should be BWAA 2020 Fighter of the Year, Teófimo, Fury, or Canelo

To some fans, the quick answer is Teófimo Lopez, even though Teofimo waged only one war in 2020. 🥊

However, that one battle was such a meaningful victory over Vasily Lomachenko that it could be enough for the unbeaten, unified WBA/IBF/WBO/WBC Lightweight World Champion 🇭🇳🇺🇸 “The Takeover” Teófimo López (16-0, 12 KO’s) to claim the “Fighter of the Year Award” in this so unusual year 2020 where the Planet’s top fighters saw little action. ⭐️

Yes, for some fans, the legendary, highly coveted award should go to “The Takeover,” which aims to even more thrilling wins over tough warriors in 2021, including a blockbuster rematch against Lomachenko. 🔥

That super win was electrifying, resounding… a real treat to all of us boxing fans.

Notably, legendary world champion and Filipino hero 🇵🇭 Manny Pacquiao (62-7-2, 39 KO’s) who has won the Fighter of the Year award in the past, is not being considered for this year because the beloved Pacman, 42, was not able to fight during the year 2020. His last rumble was his win against Keith Thurman in July of 2019. 😬

There have been reports that the Filipino icon might box Irish UFC star 🇮🇪 Conor McGregor next. Maybe that will come, although the hot rumble does not appear to be 100% confirmed as of now. We keep you informed. ✋🏼

Furthermore, hugely popular Mexican superstar 🇲🇽 Saul “Canelo” Álvarez (54-1-2, 36 KO’s) is as well be considered by many boxing fans for the fighter of the year award for his win over Briton titlist WBSS winner 🇬🇧 Callum Smith (27-1, 19 KO’s) days ago in San Antonio. ⭐️

However, how Canelo triumph over Smith when compared with Teófimo’s sensational win over 🇺🇦 Lomachenko and 🇬🇧 Tyson Fury’s startling destruction of Deontay Wilder?

Bearing in mind that the greatness of a win in boxing depends in big part on who was defeated and how, the truth is that Canelo’s Title win over Smith, even though awesome, was largely expected. Canelo was the total favorite to beat Smith, and he did it, and did it well.

In contrast, not many fans and experts expected the younger Teófimo to handsomely defeat Lomachenko the way he did, being Loma one of the most amazing and gifted fighters on Earth who at the time considered by many the world’s top pound4pound warrior.

But wait, and how many fans got awed and thrilled with 🇬🇧 Tyson Fury’s riveting, fabulous, sensational knockout win over Deontay Wilder, one of the most fearsome heavy-punchers in boxing? I was.

That’s why, this year’s bwaa’s “Fighter is the Year” should go for either 🇭🇳🇺🇸 Teófimo, 🇬🇧 Fury or Canelo. 👍 But who would you pick.. and why?

For some, the 23-year-old big revelation of 2020 Teófimo Lopez should be the one getting the trophy. He was exciting in brilliantly outboxing a really awesome tactical boxer as the Ukrainian 2-time Olympic Gold 🇺🇦 Vasily Lomachenko (14-2, 10 KO’s) in their high profiled unification fight.

Surely for others, 🇬🇧 Tyson Fury is the best because he was simply MORE THRILLING. 💥💥

Whoever the BWAA names fighter of 2020, Teófimo or Fury or Canelo, it’s ok, because their victories in this year of the pandemic were simply fantastic for all of us boxing fans, paving the way for more excitement in the new year soon to begin. 👍👍