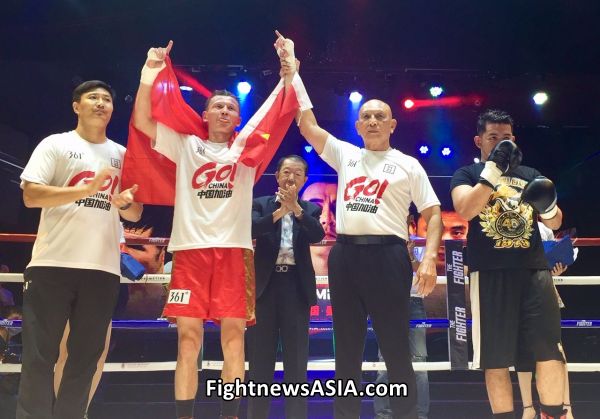 BANGKOK, Thailand    —    The coronavirus outbreak has seriously affected boxing in countries and regions here in Asia.   China, Japan, South Korea and other nations have already cancelled all boxing events for the time being in an attempt to stop the spread of the disease.

The whole boxing community over here in Asia is concerned, reason for which top China promoter Liu Gang has staged an exciting card here in Bangkok, aiming at rising funds for combating and knocking out the pandemic.

“We are all in this fight together, assures Liu Gang, the most active and successful boxing promoter in China.

“We need to put our minds and fists together in attacking and defeating the coronaviris A.S.A.P., and we will succeed,” added Liu Gang, also head of M23 Max Boxing Promotions, the company that handles the fighting career of reigning WBA Featherweight world champion “The Chinese Monster Xu Can (18-2, 3 KO’s).

The show went on as planned. But there were no fans in attendance.    Only boxers, officials, promoters, coaches, TV people, and the ring doc.   No one else.

It is hard to imagine a pro boxing event without screaming fans.   But that’s how it happened.

The complete 7-bout card, which lasted three hours, was broadcast and streamed live on Sunday, March 8, from the Suam Lum Night Bazaar here in Thailand’s City of Angels Capital, Bangkok, to millions of boxing fans in mainland China.

And the boxing show with a noble cause did not disappoint.

In the main battle, “The Chinese Destroyer” Baishanbo Nasiyiwula (17-3-1, 7 KO’s) from Urumqi in Northwestern China overpowered Filipino come back kid Welbeth Loberanis (12-3, 3 KO’s) of Cebu City, forcing the Filipino corner to concede defeat by the end of the hot round seven.

In the co-feature, flyweight Wulan Tuolehazi (14-4-1, 7 KO’s), also from Urumqi, stopped tough Filipino Jomar Fajardo, 27, in a rumble that Wulan dominated from the getgo, asserting dominance both in the power department as well as in boxing skills section. The referee was the experienced Chalerm Prayadsab.

In the most entertaining war of the evening, 21-year-old Lunjun Zhao (8-1-1, 1 KO) dominated and outclassed more-experienced, heavily tattooed Vachayan Khamon of Ubon Ratchathani in a six-stanza lightweight saga.   The Thai veteran Khamon  –   who currently fights both in Muay Thai and boxing  –   absorbed all the power shots Zhao could deliver on him, ending the battle on his feet, and while the winner was being declared, the two boxers engaged in a lively push-up competition.

Moreover, heavy-handed 23-year-old Chinese A Fu Bai (10-3, 7 KO’s) detonated hard on back-pedaling Aphisit Namkhot of Sa Kaeo,,Thailand, cutting his way out, pinning him against the ropes, unloading damaging leather on him, stopping the Thai warrior in less than three minutes of action.

In another knockout clash, unbeaten Chinese super lightweight Yeerlan Nuerlanbieke (5-0) brutalized 18-year-old Thai combatant Channarong Injampa, stopping him during the rough minutes of the fourth round.

The author Carlos Costa of Panama is a veteran boxing reporter living in Asia.   Carlos can be reached at carlos512@hotmail.com and whatsapp: +639184538152.