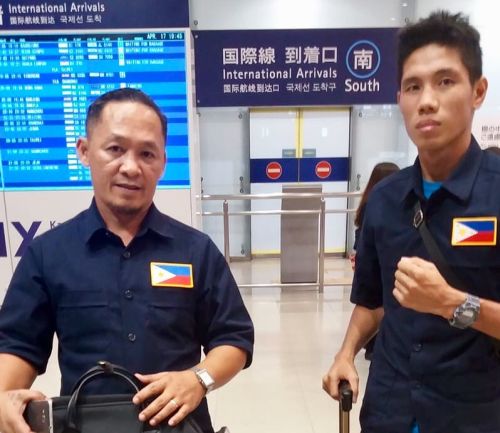 Noynay, 23, of the popular Gabriel “Bebot” Elorde Boxing Gym lands in Osaka in a reportedly excellent physical conditioning, guided by the coach Villamor, 41, a serious and committed man of boxing no stranger to leading Bebot Elorde boxers into wins abroad.

According to coach Artcher Villamor, the scouting report about opponent, Kosuke Saka, 27, is that the Nippon fighter is a man with dynamite in his fists.

The scouting report on Saka is as follows:

“Kosuke Saka is a huge puncher who has serious power.    Kosuke is offensively crude, but heavy-handed and very dangerous.

“In contrast, Noynay has better fighting movements, better boxing skills and has a smarter boxing brain than Saka.

“, smart, quick and sharp.   Plus, Nonoy has an educated jab and has a very long and effective straight left punch (Noynay is a southpaw).
“Also, Joe has quick body shots in his fighting arsenal.”

That was very detailed.

So at the end of actions, who will claim victory and the WBO Asia Pacific belt?

Will the winner be Joe Noynay the visiting Filipino world-ranked fighter who is rising so much by going to Japan again?

Or will it be the strong local samurai Kosuke Saka, a man wanting so much to break into the world rankings?

Fans will find out soon enough.


Interestingly enough, the hot Joe Noynay vs Kosuke Saka title clash is the second boxing incursion of “The Jaw Breaker” Noynay in the land of Japan.

Two years ago, Noynay lost by points a hardly-contested rumble against talented Japanese featherweight Reiya Abe (19-2, 9 KO’s) in Tokyo.     It was a good fight against tough foe Reiya Abe who is currently WBC # 9 and IBF # 4.

However, Noynay’s hard-work and dedication to training have transformed his Japan defeat to a resourceful boxer as Reiya Able into a valuable learning experienced that has forged him into a more complete and confident fighter today.

mission in Osaka will grant the winner the WBO Asia and will elevate his standing in the highly competitive super featherweight division.