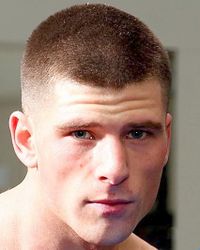 By Matt Thompson at ringside

The slick-boxing Wright started well, using a fast jab and clever right hand leads to jump to an early start, but DeLuca cut the distance and bullied Wright to the ropes in the middle rounds, banging away at the body and roughing Wright up whenever he got close.

Wright came back with a solid 9th round, bloodying DeLuca’s nose with a clean right hand counter, boxing and moving well as DeLuca stalked forward. In a give and take 10th , both boxers had their moments with Wright boxing well but DeLuca landing the harder shots to the head and body in close. The championship rounds seemed to belong to DeLuca as he landed the more telling shots, pressing the action and keeping the fight at his own distance.

Wright thanked DeLuca and Murphys Boxing for the opportunity and had nothing but compliments for DeLuca after the fight.

“I see why he is a world champion. He’s strong, tough, and determined. I felt that my speed made the difference, but I can take nothing from Mark, he’s a great fighter and will come back better and smarter after this.”

DeLuca, likewise was classy in defeat, posting “If you like to take credit for the sunshine, be prepared to take blame for the rain.” He gave full credit to the cagey veteran, and is looking forward to getting back in the gym and learning from the experience.

In the 8 round heavyweight co-feature, Niall “Boom Boom” Kennedy, 11-0-1, 7 KOs of Wexford, Ireland and Raleigh, NC’s Joel Caudle, 7-1-2, 5 KOs fought to a majority draw in an exciting bout in which both men gave and took bombs throughout. Fighting at a pace more often seen in middleweights, Caudle and Kennedy spent most of the evening in the center of the ring exchanging combinations with vigor. Caudle found an early home for his looping right hand, while Kennedy couldn’t miss with lead left hooks. Although both tired slightly toward the end, their punch output barely slowed and both seemed to be staggered often, taking and giving in equal portions.

After all was said and done, judge Mary Frietas saw the bout 78-74 for Kennedy, while both Mike Nolin and Martha Tremblay scored it even.

Amanda Pavone, 124, remained undefeated at 5-0, 2 KOs with a split decision over Karen Dulin, 122.8 over 6 entertaining rounds. Pavone pressed the action throughout, fighting with aggression and determination, banging away at the body to set up head shots. Dulin boxed well early, but was unable to keep Pavone at bay for any length of time after the second round. Judges Martha Tremblay and Mike Nolin saw the bout 58-56 for the Pavone while Mary Frietas saw it 58-56 for Dulin.