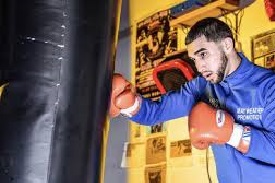 Super featherweight prospect Xavier Martinez (13-0, 9 KO) is set to face John Moralde (21-2, 11 KO) in a 10-round bout on the April 5 edition of Showtime’s ShoBox: The New Generation, which will be a tripleheader from Sam’s Town in Las Vegas.

The 21-year-old Martinez and 24-year-old Moralde sat down to discuss the upcoming bout.

On what they know about their opponent:

Martinez: “I don’t know much about him. He fought Jamel Herring so I know he has been in there with someone who is pretty good. I think this is a good matchup for me. If I go in there and do what I know how to do, things will go my way. I’m going to try to make statement on national television with an early knockout. I know I will have to be smart and aggressive to get it. I’m ready.”

Moralde: “I see him as a very promising prospect, and he is also talented. Nonetheless, I bring a lot of quality experience to the table. Be ready for an upset on April 5. I will be leaving the ring as the winner.”

On what a win from this fight will do for their career:

Martinez: “A win over Moralde will put me a step closer to a title shot — perhaps as soon as early next year. My main goal right now is to become a world champion.”

Moralde: “I believe that a win over Martinez will change the course of my career. I know this is not an easy fight, but I’ve been on tough situations before and I have come out victorious. I am not looking pass this fight, I have my eyes set on a victory over Martinez.”

On the progress of training camp:

Martinez: “I’ve had a great training camp. My team and I have focused on perfecting my craft and developing my skills. We are working very hard so we can get closer to a title shot.”

Moralde: “Training camp is going well. I’m planning to have a six-week camp and then fly to the U.S. two weeks before the fight to acclimate. I will be in great condition come fight night.”

Are you doing anything new this camp or making any adjustments to prepare for this fight?

Martinez: “Floyd [Mayweather Jr.] watched my last fight ringside and gave me a few pointers. We are working on my jabbing and head movement. I’m perfecting my craft. Come fight night, I will show boxing fans why I am a top prospect at 130.”

Moralde: “Every opponent is different. I know Martinez is a good fighter, so I am preparing accordingly. I have a plan. I will stick to it on fight night and get the win.”

How does it feel to fight on national television?

Martinez: “This will be my third televised fight but my first time on SHOWTIME. I’m very excited. It makes me train harder because I know a lot of people are going to be watching. It’s an opportunity to show the world what I can do.”

Moralde: “I bring a lot of experience to this fight, as I’ve been on major shows before. I’ve been on national U.S. television, international livestreams and world title promotions. This type of television exposure only motivates me and brings the best out of me. I appreciate the opportunity and I’m preparing to take advantage of it.”