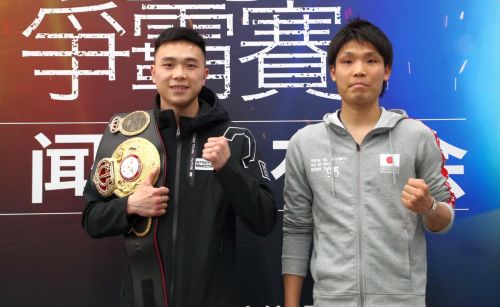 Fightnewsasia Xu Can vs Shubo

The announcement was done by fight promoter Liu Gang during a press conference in China attended by the two 5′ 9″ fighters who faced off serious but friendly towards each other during the plush media event organized by Max Power Promotions.

The show’s main star, soft-spoken 25-year-old Xu Can (16-2, 2 KO’s) from the Spring City of Kunming in Southwestern China, claimed his WBA 126-pound world title by surprising, outclassing and dethroning hard-hitting Puerto Rican titlist Jesus Rojas (26-3-2, 19 KO’s) last January at the Toyota Center in Houston, and his first title defense is just around the corner.

For his battle against his WBA # 10 Nippon challenger Shu Kubo, Xu Can has been training at Liu Gang’s M 23 Boxing Gym in Beijing with his preferred sparring partner 22-year-old Filipino lightweight Joepher Montaño (10-4-2, 9 KO’s), a young fighter who comes from an impressive come-from-behind spectacular ABF title win just weeks ago in Bacolod, Philippines.

Joepher Montaño as sparring is a smart choice for Xu Can’s team as the Filipino is of the same southpaw stance, same height same power punching approach as Shun Kubo.    Xu Can is no way near being a devastating hard-puncher so polishing his boxing skills is a must.   In contrast, Shu Kubo is a man with proven power in his hands.

Therefore, in theory, the title match could unfold as the classic engagement of the good tactical boxer vs the coming forward knockout warrior.  Exciting.   Who will emerge victorious?

“In addition, WBA world champion Cañizales will defend against former world champ Sho Kimura.    You should remember that Sho Kimura was the man who terrorized and ended the career of former Top Rank’s Golden Cow Zou Shiming before?    Will Sho Kimura stop Cañizales too?    I think May 26 will give fans an exciting show of good boxing,” thinks Liu.

However, boxing fans here in Asia are surprised in seeing the 30-year-old Sho Kimura coming back down to 108-pounds because during the last 3 years the awesome samurai warrior has competed exclusively at 112 lbs.

Four pounds at that weight class might be tough to do, especially, when Kimura has grown older and hasn’t come down to eight stones in years.

Will the terror of Zou Shiming somehow manage to dominate that further reduction in weight to be strong, fast, and devastating against an aggressive powerful warrior as Carlos Cañizales, the same unbeaten Venezuelan natural 108-pound destroyer who ravaged, ended and sent to hospital his last opponent Chinese Lu Bin last July in Malaysia?

In fact, Cañizales is a man who performs really well in all his world title fights in Asia.

Tough mission, right? But Fans will find out.

The WBA World Title Double-Header May 26 in Fuzhou (福州), China, is a production of promoter Liu Gang of Max Power Promotions in Golden Boy Promotions, and May the Best Men Win.