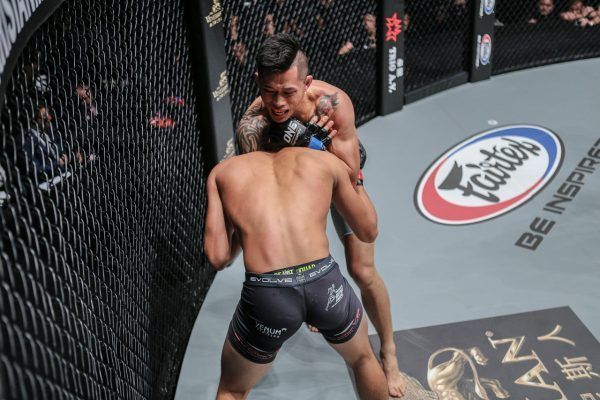 ONE: DAWN OF HEROES will feature a star-studded cast of proven finishers inside the Mall Of Asia Arena in Manila, Philippines on Friday, 2 August.

Every athlete scheduled for action on the 15-bout card is capable of ending a contest in spectacular fashion. When it hits the mat, the mixed martial artists will bring their submission prowess to chase the finish.

Many of these multi-skilled warriors are competitive in every area of the game, but being able to take advantage of an opportunity on the canvas has led them to great success.

Here are 10 of the finest submissions victories from the athletes competing on the bill next month.

Christian “The Warrior” Lee and Martin “The Situ-Asian” Nguyen were rising stars when they first met at ONE: HEROES OF THE WORLD. Both are now ONE World Champions, but it was the Vietnamese-Australian who left Macau with bragging rights in August 2016.

Lee looked in good form as he swarmed Nguyen with strikes, but his aggression left him wide open and “The Situ-Asian” dropped him with an overhand left.

With the Singaporean dazed, Nguyen secured a guillotine choke in a scramble, cinched it tight onto his bicep and then squeezed until “The Warrior” passed out face-first on the canvas.

Nguyen will put his ONE Featherweight World Title on the line against Koyomi “Moushigo” Matsushima in the headline attraction of ONE: DAWN OF HEROES.

Demetrious “Mighty Mouse” Johnson snagged the 12th submission victory of his professional career in his promotional debut against Yuya “Little Piranha” Wakamatsu at ONE: A NEW ERAin March.

The Japanese striker rallied with punches in front of his countrymen, but Johnson’s grappling ability came to the fore in round two. He took his rival down and secured back control just as the hometown hero tried to work back to his feet.

Wakamatsu defended well, but when he tried to escape to his feet for a second time, the American locked up a tight guillotine choke to claim a hard-earned finish.

In Manila, Johnson faces the man below in a ONE Flyweight World Grand Prix semifinal bout.

Tatsumitsu “The Sweeper” Wada needed less than a minute to finish Eugene Toquero at ONE: WARRIOR’S DREAM in November.

Following a brief feeling-out period, he capitalized on the Filipino’s eagerness to strike in a major way.

Toquero overextended on a left hook and exposed his back. Wada took the invitation, climbed on, and put his hooks in to secure the position. By the time they hit the canvas, the rear-naked choke was locked in and the tap came quickly after.

Wada will attempt to build off the momentum of his quarterfinal win over Gustavo Balart when he faces Johnson in the tournament semifinals next month.

At ONE: AGE OF DOMINATION in December 2016, the Team Lakay product took his countryman to the canvas and dominated for almost four-and-a-half minutes. Then, he saw his opportunity to latch on to a submission.

He secured underhook control on his opponent’s right arm, pummeled away with ground and pound, and then took advantage of Toquero’s escape attempt by switching sides and locking on an armbar to get the win.

In the semifinals of the ONE Flyweight World Grand Prix, he faces the man below.

After years of competing in the bantamweight division, Australia’s Reece “Lightning” McLarendropped to flyweight at ONE: LEGENDS OF THE WORLD in November 2017, and he immediately showcased his submission threat in the new weight class.

McLaren was clearly levels above Anatpong “Mak Mak” Bunrad on the ground. He threatened the Thai with different attacks, and ultimately set the trap for a D’Arce choke.

Bunrad turned into the choke, leading the Aussie to mount his rival and then arch inward with his hips to elicit the tap.

“Lightning” gets a second chance in the ONE Flyweight World Grand Prix. He replaces Kairat Akhmetov to face Kingad in his rival’s home nation.

Leandro “Brodinho” Issa dispatched Roman “Boom” Alvarez just 86 seconds into their clash at ONE: SPIRIT OF A WARRIOR in June 2018.

Alvarez flew out of the blocks and dropped the veteran BJJ black belt with a left hook early on, but “Brodinho” managed to drive his opponent across the Circle and scrambled to top position.

The Brazilian passed the guard and worked his head into his rival’s armpit to set up his arm-triangle. He moved from mount to side control, where he piled on the pressure and got the tap.

Issa returns to action against Daichi Takenaka on 2 August.

“The Stalker” Xie Bin’s ground offense was simply too much for Chan Rothana at ONE: KINGS OF DESTINY in April 2017, and he ended the contest with a tight D’Arce choke in round two.

Xie cruised in the side control position until the Cambodian offered up a route underneath his armpit.

The Chinese athlete quickly threaded his right arm through and locked up a figure-four grip on his bicep, and then eventually rolled to his back to finish.

In Manila, he will meet the beloved home favorite below.

Jordan “Showtime” Lucas will forever regret his failed takedown attempt on Edward “The Ferocious” Kelly, as the Team Lakay veteran used it to finish the Aussie at ONE: UNION OF WARRIORS in March 2016.

Lucas shot in for a double-leg takedown on the fence, but Kelly’s fast-thinking saw him quickly slide his right arm under his opponent’s neck. He grabbed his left bicep and put on a tight squeeze to score a first-round submission victory.

Kelly is set to face “The Stalker” in front of his countrymen next month.

Third-degree judo black belt Ayaka Miura made a big impression in her debut on the global stage for martial arts when she submitted former ONE Strawweight World Title challenger Laura “La Gladiadora” Balin in just 73 seconds at ONE: CALL TO GREATNESS in February.

A big hip throw landed the Japanese athlete straight into side control. From there, she trapped Balin’s arm between her legs and turned her hips to end the bout with her patented scarf hold Americana.

The Japanese combatant will attempt to take out another former World Title challenger in Samara “Marituba” Santos at the Mall Of Asia Arena.

Aiman Gives Chen The First Blemish On His Record

Despite being up against his foe’s hometown crowd, “Jungle Cat” Muhammad Aiman handed “Rock Man” Chen Lei the first defeat of his career at ONE: BEYOND THE HORIZON in September.

Chen charged in for a takedown and forced Aiman into the corner of the ring, but the Malaysian maneuvered around to his back where he locked up a choke.

With the grip tight, he laced his legs into a body triangle for more security and then sealed the deal with a tight constriction.

“Jungle Cat” will open the show in the Philippines against “The Terminator” Sunoto. 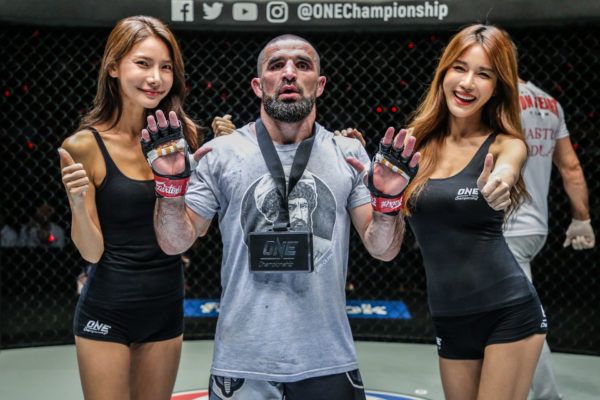