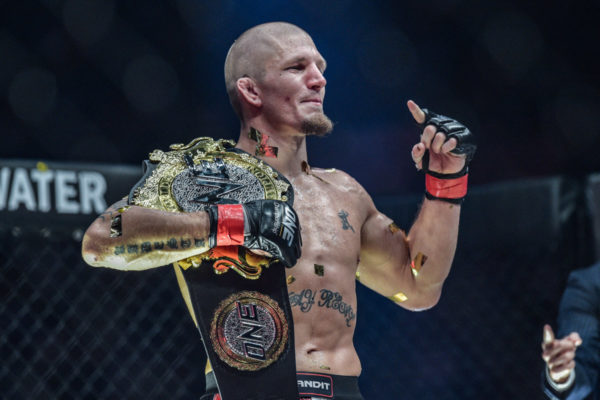 The dust has settled on another night of thrilling martial arts action in Jakarta, Indonesia.

On Saturday, 17 November, ONE Championship descended on the Stadium Istora for ONE: WARRIOR’S DREAM, which delivered a card full of unforgettable finishes, phenomenal performances, and a new World Champion.

As always, the event taught us a lot about the athletes who put their bodies and records on the line. Here are just four of the night’s biggest takeaways.

Zebaztian “The Bandit” Kadestam now has three wins in the world’s largest martial arts organization, and he has earned each one with a knockout in the final round.

First, he snatched victory from the jaws of defeat against Luis “Sapo” Santos with powerful knees on the ground. In July, he put a stamp on his performance against Agilan “Alligator” Thani with a third-round flurry.

This time, he took his contest with Tyler McGuire out of the judges’ hands with just 28 seconds remaining. Had the athletes’ completed all five rounds, the result could have gone either way, but the Swede never stopped searching for a decisive blow.

Kadestam finally landed one as his opponent backed away. His right hand caught the American’s chin on the button, which sent him crashing to the canvas. “The Bandit” demonstrated his finishing instinct once again by diving in to close the show and win the ONE Welterweight World Title.

When the Swede defends his belt for the first time, his adversary will have to be on his guard at all times – no matter how the match-up has gone up to that point.

No man has a stronger claim to a ONE Strawweight World Title shot than Hayato Suzuki.

Even before his bout with Pongsiri “The Smiling Assassin” Mitsatit, he had a good argument to challenge for the division’s crown as the last man to beat the current king – Joshua “The Passion” Pacio.

Now, his case is practically iron-clad.

The Japanese grappler improved his professional record to 20-1-2, which is unmatched in his division.

He also put his opponent away at the 2:09 mark of round one – almost a minute and a half quicker than the Filipino World Champion, who will face a big challenge if he has to defend his belt in a rematch against the Brave gym product.

#3 Lerdsila Has Not Lost A Step

Lerdsila Phuket Top Team was pushed all the way when he first met Sok Thy.

The margin of his split-decision victory was so narrow, an immediate rematch was ordered, and some may have wondered whether he still had what it takes to overcome a young, hungry contender.

In the rematch in Jakarta, the multiple-time Muay Thai world champion made sure there was no doubt about his capabilities with a commanding performance.

Lerdsila controlled the action from the first bell. He kept his opponent at bay with quick-fire counter shots, caught him off-guard with creative strikes, and put him on the canvas with a picture-perfect dump when Thy attempted to catch up on the scorecards with powerful kicks.

He may be 37 years old, but this dominant unanimous decision victory proves it will take something special to take out this Thai legend in ONE Super Series.

#4 Indonesian Martial Arts Is On The Rise

Indonesia swept the boards at ONE: WARRIOR’S DREAM, proving this proud nation is producing a wave of talented martial artists.

“Thathie” has been the most active competitor in The Home Of Martial Arts this year, and made the case to be considered for a ONE Women’s Atomweight World Title Shot in 2019.

Elsewhere on the card, Anthony “The Archangel” Engelen picked up his second win in eight days, Egi Rozten returned with another knockout finish, Adrian “Papua Badboy” Mattheis set the records for the most wins and finishes in ONE strawweight history, and Dwi Ani Retno Wulan won her professional mixed martial arts debut.

However, arguably the most impressive performance from local talent came from Elipitua Siregar.

The 21-year-old Bali MMA product notched his third victory since his professional debut in May, and he maintained his 100 percent finishing rate as he took a significant step up in competition against Muhammad “The Spider” Imran.

Siregar capped a mature display with a second-round rear-naked choke that reminded the world of his offensive grappling capabilities. He will be one of the athletes to watch next year as he continues to improve and face bigger challenges.