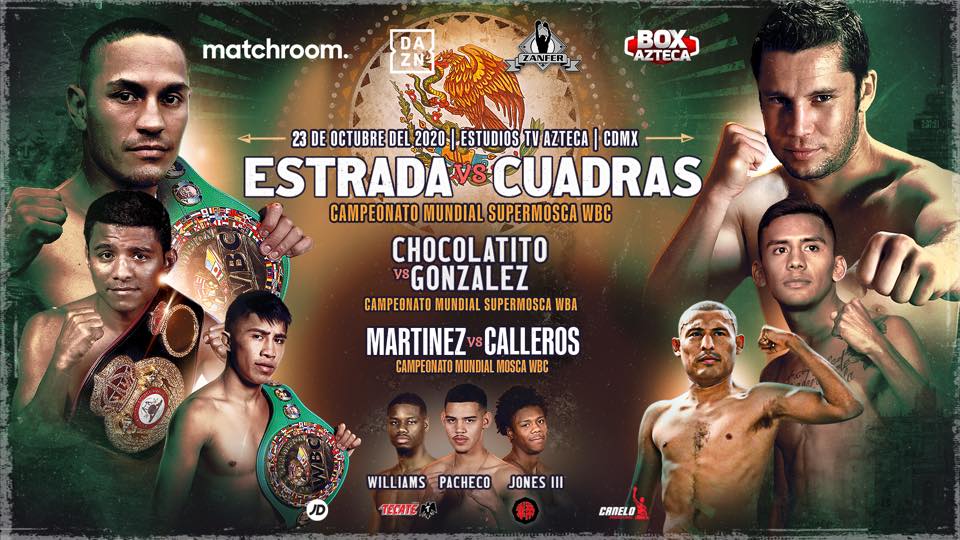 5 Mexican boxers will see action in 3 world championship fights this Viernes, October 23, at the studios of TV Azteca in Ciudad de México

The Mexicans will be fighting in the multi-star card promoted by Promociones Zanfer in association with Matchroom Boxing aired live on the DAZN, TV Azteca, and ESPN.

3 years ago, Estrada outpointed Cuadras by unanimous decision, but just by only one point on the scorecards of the three judges.

Lets find out what will happen when Estrada and Cuadras battle again.

Another world title contest between Mexicans will be the defense that Julio César “Rey” Martínez (16-1, 12 ko’s) will make of his WBC Flyweight World Championship, as he battles experienced fellow Mexican Moisés “Taz” Calleros (33-9-1, 17 KO’s), who fights his 3rd title shot.

Another Mexican in search of a world championship will be Israel “Jiga” González (25-3, 11 KO’s) who will challenge multi-division world champion WBA Super Flyweight King, “the glory of Nicaraguan boxing” Román “Chocolatito” González.

All three world title fights this Viernes in México will be broadcast live. May the Best Men Win