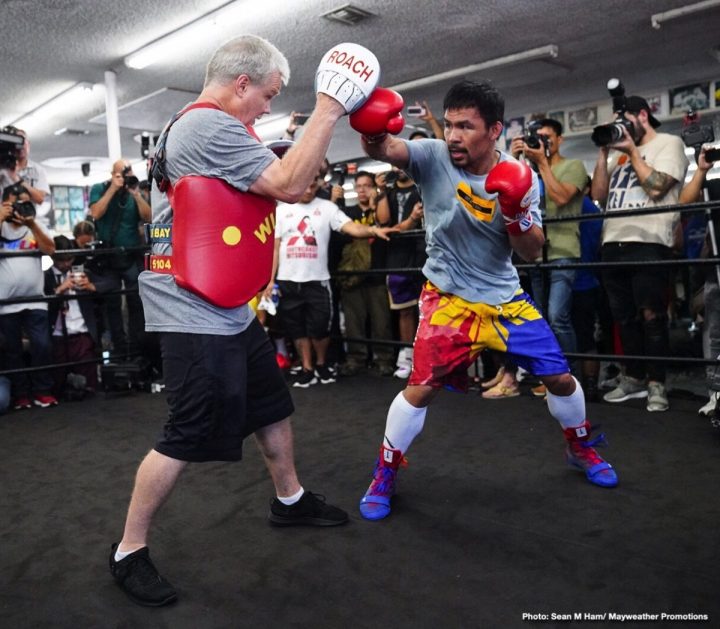 By Kenneth Friedman: Timothy Bradley has a simple tip for Keith ‘One Time’ Thurman to use to beat Manny Pacquiao next Saturday night, and that’s to “hit him upside his head” whenever he gets close. In a nutshell, that’s Bradley’s expert tip for Thurman (29-0, 21 KOs) to defend his WBA Super World welterweight title against ring legend Pacquiao (61-7-2, 39 KOs) when they meet up on Fox Sports Pay-Per-view at the MGM Grand in Las Vegas, Nevada.

Is Bradley qualified to give Thurman tips in how to beat Pacquiao?

Bradley, 34, might not be the best person to be giving tips to Thurman in how to beat Pacquiao. Tim’s record against Pacquiao is 1-2, and the one victory he got against the Filipino star was a highly controversial 12 round majority decision in 2012.

“I’m leaning for the young man, Thurman,” said Bradley to Fighthype in predicting the winner of next Saturday’s fight between Pacquiao and ‘One Time’ Thurman. “I respect Pacquiao. I seen his performance against [Adrien] Broner. It wasn’t a super highly impressive fight from him. Thurman has got something for him. He does, and he’s a young guy, and he’s got explosive punching power. Also, he’s got great timing; great timing is what you’ve got to have. You’ve got to retain your concentration and focus for 12 rounds,” said Bradley.

Is Bradley bitter about his past losses to Pacquiao?

Bradley lost to Manny by a 12 round unanimous decision in their rematch in April 2016. Bradley never fought again after that defeat to Manny, and you can argue that he got out at the right time. Had Bradley continued to fight, he would have had to mix it up with the likes of Errol Spence Jr., Thurman and Terence Crawford. With Bradley signed with Top Rank, he likely would’t have been able to fight Spence, Shawn Porter, Danny Garcia or Thurman.READ  Manny Pacquiao Los Angeles media workout quotes – Pacquiao vs Thurman

The public wouldn’t have wanted to see Pacquiao and Bradley fight a fourth time, so Tim’s options were poor in terms of big money fights.  Had Bradley continued fighting, he would have stuck with facing these guys: Jeff Horn, Jose Benavidez Jr., Jessie Vargas, Egidijus Kavaliauskas, Luis Collazo and Sergey Lipinets.  Those wouldn’t have been easy fights for him, and the money would’t have been huge.

“We’ve seen him in the Shawn Porter fight, you know,” said Bradleyabout Thurman. “He had to go to the abyss, but hey, but at the same time, he dug down deep and found a way to win. This kid [Thurman] has got great speed too, and great timing. I know Pacquiao is faster than him. I know Pacquiao has got a punch that can hurt him. Of course, it’s Manny Pacquiao. But at the same time, I feel that Thurman, I think he’s young enough. I think that he’s bigger.  I think that he’s longer, and I think that he’s smart; he’s a smart fighter,” said Bradley.

Thurman has some speed, but it’s not at the same level as Pacquiao. Keith is fast, but his battery runs out when he throws a handful of shots. Thurman can’t stay in the pocket for any length of time.

In Thurman’s last two fights against Josesito Lopez and Danny Garcia, he ran the entire second half of those contests after fading.  As Thurman hit his 30s, his stamina has disappeared on him.

“People say, ‘go back to his last fight against Josesito Lopez.’ I get that. He was out for almost two years,” said Bradley. “Of course, he’s going to look that way. But this is the type of fight right here; I know he’s trained as hard as he’s ever trained for, because he’s fighting a legend. But I’m here to tell Thurman right now, bro, don’t believe the hype. He’s just a human just like you.”

The way that Thurman fought against Josesito Lopez, that looked like a product of age more so than ring rust. Guys like Bradley are blaming Thurman’s off performance against Lopez on ring rust, but it looked like he’d age. That’s not going to go away. There isn’t a Fountain of Youth for Thurman to drink from to transform him magically into the 25-year-old fighter that was impressing boxing fans five years ago. He’s now 30, aging, and showing signs of a guy that is getting on in years.READ  Pacquiao will knockout Thurman says sparring partner

Thurman must time Pacquiao when he rushes in says Bradley

“At the same time, when he [Pacquiao] comes in, you’ve got to time those rushes; time those rushes when he comes in. He’s super explosive,” said Bradley in disgussing how Thurman needs to time Pacquiao’s attacks to catch him on the way in. “You’re going to get a lot of head feints. He’s going to try and burn you. You’ve got good movement, use it! Out-box the guy. I held my mouth, and shut it up for a while,” said Bradley.

It’s not easy to time Pacquiao perfectly to hit him with shots. Even when fighters do time Manny and nail him, they’re not able to do it enough times to win. If Pacquiao is eluding his opponent’s shots on the way is, he’s able to get in close to work them over. At the same time, Pacquiao’s punch resistance is excellent. Other than his knockout loss to Juan Manuel Marquez in in 2012, he’s done a good job of avoiding getting hurt when he’s rushing in on the attack. Mayweather was able to time Pacquiao coming in, but he never hurt him.

Bradley: Pacquiao-Thurman will go the distance

“I’m just sick of all the people going back and forth for me about the whole situation,” said Bradley. “Yeah, the fight goes the distance. Manny Pacquiao hasn’t knocked nobody out for a long time. Thurman hasn’t knocked nobody out for a long time either. At the end of the day, I got the ‘W,’ that’s all that matters, and I’m good and I’m healthy, and I’m doing something I really enjoy,” said Bradley about his controversial 12 round majority decision win over Pacquiao in their first fight in 2012.

Bradley is predicting the Pacquiao vs. Thurman fight will go the full 12 round distance next Saturday. Tim notes that both fighters haven’t knocked anyone out in some time, and he doesn’t see it ending that way.READ  Pac vs Thurman – Keith Thurman media conference call transcript

Bradley is satisfied with his his sole win over Pacquiao from 2012. It doesn’t appear to bother him that boxing fans think he was given a gift decision.