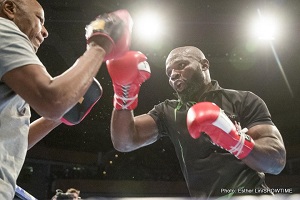 Former heavyweight world title challenger Carlos Takam (36-5-1, 29 KOs) ended his two-fight losing streak in stopping little known prospect Senad Gashi (17-2, 17 KOs) in the 7th round on Sky Box Office on Saturday night at the O2 Arena in London, England. The 38-year-old Takam started slowly in the first six rounds, doing little, and not pressing the action against the game but limited Spaniard Gashi. In the 7th round, Takam started throwing power shots with conviction, and he put Gashi down twice in the round.

he first knockdown by Takam was from an uppercut. Moments later, Takam dropped Gashi for the second and final time in the 7th round with a left hook to the head. It was a good stoppage by Takam, who had been throwing mostly arm punches in the first six rounds, and not showing any serious aggressiveness to get his opponent out of there.

Gashi landed a lot of good shots in the first six rounds. It looked for a second there that he was on his way to pulling off an upset against a listless looking Takam, who didn’t show any fire until the 7th round. It appeared that Takam wanted to get some rounds in against an over-matched opponent that had no business fighting him. Takam vs. Gashi was added to the Dillian Whyte vs. Dereck Chisora II card just this past week. It was never intended to be a competitive fight, but Takam fought slow enough to make it interesting.

After the fight, Takam called out Dereck Chisora, who stopped him in the 8th round last July. It’s unclear why Takam didn’t call out Anthony Joshua, who knocked him out in the 10th round last year in October or Joseph Parker,. Takam lost to Parker by a 12 round unanimous decision in May 2016.

“He [Gashi] was amazing, I was waiting for the sixth and seventh to attack,” Takam said to Sky Sports Box Office. “Good luck to Whyte and Chisora. I want you next Chisora, you are next. I’ll come back to the UK, this is my house now.”READ  Hearn wants Usyk to face Whyte, Chisora, Ward or Takam in early 2019

Takam likely won’t get the winner of tonight’s rematch between Dillian Whyte (24-1, 17 KOs) and Dereck Chisora (29-8, 21 KOs), but there’s a chance he could face the loser. It’ll be up to Matchroom Boxing Promoter Eddie Hearn, and, of course, Chisora and Whyte. They don’t have to face Takam if they don’t want to. Both have enough cache not to be told who they’re going to fight by Hearn. It’s more likely that Hearn will steer Takam into a fight against David Price or Dave Allen. Those are both doable fights, considering that both of those guys are signed with Hearn. Takam would have to be seen as a big favorite over Price and Allen if Hearn made one of those fights. Takam will likely have too much for Price. You can’t count Price out due to his size and punching power, but he would need to jump on Takam straightaway by bum rushing him otherwise he’ll get stopped.