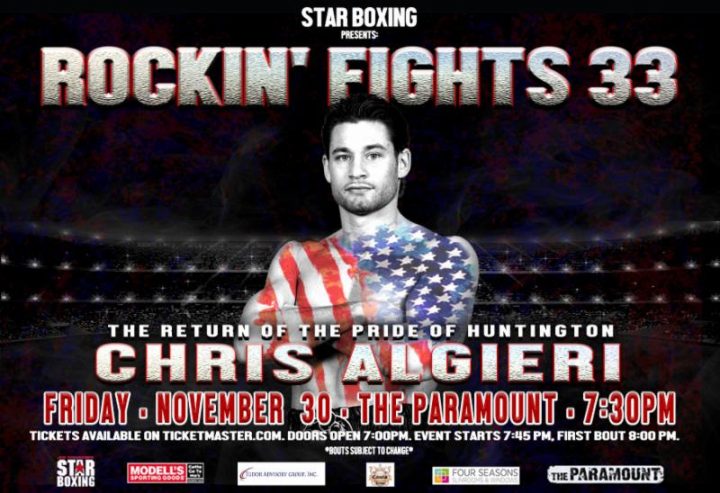 By Jeff Aranow: Former WBO light welterweight champion Chris Algieri (21-3, 8 KOs) will be emerging from a 2 1/2 year layoff this month in his comeback on November 30 against journeyman Angel Hernandez (14-11-2, 9 KOs) in their fight at the Paramount Theatre, Huntington, New York.

Algieri has been working as a nutritionist for Daniel Jacobs. It’s unclear whether that’s a job that pays. With Algieri coming back to boxing at 34, it’ll be interesting to see how successful he is.

Even with the inactivity, Algieri should be able to beat Hernandez. This is a fight that is a very winnable one for Algieri. Hernandez can punch a little though, and he might might be able to take advantage of Algieri’s age and inactivity by getting him out of there. Hernandez, 27, has lost three out of his last four fights.

The last time Algieri fought, he was stopped in the 5th round by Errol Spence Jr. on April 16, 2016 at the Barclays Center in Brooklyn, New York. That defeat was Algieri’s third in his last four fights, and a clear sign that he doesn’t belong at welterweight. It was a questionable move for Algieri at the time to face a talented fighter like Spence given how things had gone in his recent fights before that. Algieri had already lost to Amir Khan and Manny Pacquiao before he took on Spence. It was clear from those fights that he wasn’t suited for the 147 lb weight division.

It’s been four years since the 34-year-old Algieri last fought at the Paramount Theatre in defeating Emmanuel Taylor by a 10 round unanimous decision in February 2014.

During the height of Algieri’s career, he defeated Ruslan Provodnikov by a 12 round split decision to win the World Boxing Organization light welterweight title in June 2014. That was a surprise win for Algieri, as a lot of boxing fans expected Provodnikov to overpower him and score a stoppage. Algieri almost didn’t survive the 1st round after being knocked down twice. It was only due to the patience of the referee that Algieri was able to make it out of the 1st round without being stopped. In Algieri’s next fight, he was beaten by WBO welterweight champion Manny Pacquiao by a 12 round unanimous decision in November 2014. Algieri got a big payday from the Pacquiao fight, but he lost badly in getting dropped numerous times.

Since the Pacquiao fight, Algieri has won only one fight in beating Eric Bone. Algieri has lost to Spence and Amir Khan in two of his last three fights.

Algieri being a well known fighter with little punching power, it’s possible that he could get a fight against WBA Super World welterweight champion Keith ‘One Time’ Thurman when he returns to the ring in 2019. Algieri is the perfect opponent for Thurman to fight when he does return to the ring. Algieri just needs to make sure he doesn’t lose his fight with Hernandez, and whoever else he’s matched against after that.