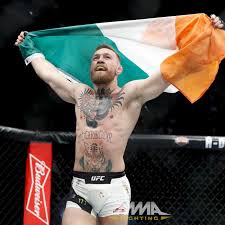 It’d be an understatement to say Dustin Poirier is an interested observer in UFC 229’s mega-fight between UFC lightweight champion Khabib Nurmagomedov and Conor McGregor.

Poirier is currently slated to meet Nate Diaz in a highly-anticipated showdown on Nov. 3 at UFC 230. In doing so, “The Diamond” will welcome Diaz back the UFC fold less than a month after Nurmagomedov and McGregor collide in a matchup that very well could be the most successful pay-per-view in mixed martial arts history. A win over Diaz could set the stage for Poirier to fight the victor of Nurmagomedov vs. McGregor for the 155-pound title, so one would imagine Poirier will be keeping a close eye on UFC 229’s main event.

And when Poirier thinks about the stylistic matchup at play between the two popular lightweights, he can’t help but favor the division’s current king.

“I’m kinda leaning toward Khabib,” Poirier said Monday on The MMA Hour. “I just don’t know if he’s going to stop Conor or whatnot, but I’m thinking he’s going to get the victory.”

That being said, Poirier still carries intimate knowledge of the dangers McGregor brings to the cage. The two met at UFC 178 back in Sept. 2014 during both man’s featherweight days, and McGregor made short work of the American, downing Poirier with punches less than two minutes into the contest. That fight was just one of McGregor’s seven knockout victories under the UFC umbrella, so Poirier knows it’d be silly to discount the Irishman’s chances to pull off the upset against Nurmagomedov and reclaim his title.

“I mean, he has a huge chance,” Poirier said. “He’s got great timing, great judge of distance. We’ll just see if the takedown defense holds up and the cardio holds up. That’s all he has to do. The openings will be there, but he just has to stand the test of the wrestling and the conditioning, the physical part that Khabib’s going to put on early in the fight.”

One of the biggest questions surrounding UFC 229 is the mystery of how McGregor will fare after being sidelined for so long. “The Notorious” made his professional boxing debut against Floyd Mayweather last year, but hasn’t actually fought in MMA since his Nov. 2016 victory over Eddie Alvarez. That’s a lot of time off and could make ring rust a legitimate factor, especially with McGregor facing a foe as high-level as Nurmagomedov. But Poirier ultimately doesn’t see McGregor’s hiatus affecting the outcome once UFC 229 arrives.

“It’s all a mindset, really,” Poirier said. “Once you get your rhythm down, your timing, everything else falls into place.”