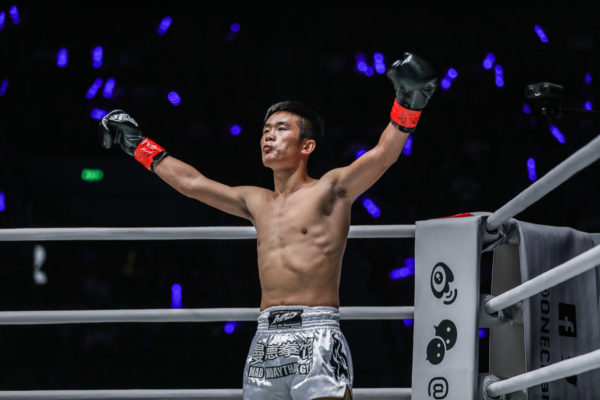 Han Zi Hao’s first ONE Super Series win has filled him with confidence ahead of his promotional return.

The Chinese star earned a dominant unanimous decision victory against Stergos “Greek Dynamite” Mikkios at ONE: BEYOND THE HORIZON in Shanghai, China in September.

Just a few days after his dynamic performance, Han was back in the gym to prepare for his next assignment – a bantamweight kickboxing contest against Ryan “The Filipino Assassin” Jakiri at ONE: PURSUIT OF GREATNESS in Yangon, Myanmar on Friday, 26 October.

After showing glimpses of his potential in his ONE Championship debut in late July, the Mad Muay Thai Gym representative was outstanding in his sophomore appearance just six weeks later.

He controlled much of the bout – dumping his opponent to the mat on several occasions, and scoring knockdowns in the first and second frames on his way to a sweep of the judges’ scorecards.

“My strategy was to test my opponent’s skills tentatively in the first half of the first round, then disrupt his attacking rhythm, and then take him apart, step by step,” he says.

“My opponent was very strong, but I stayed calm, and I found he was not as strong as me.”

Though it did not show, the 23-year-old admits he felt some nerves ahead of the match-up at the Baoshan Arena.

However, his success when he engaged with Mikkios settled his nerves for the rest of the contest – and ahead of his next challenge in the world’s largest martial arts organization.

“Beating him made me feel more confident about competing at bantamweight because I used to compete at a lighter weight, and moving up made me a little bit uncomfortable,” he explains.

It was also a special night for the Top King Muay Thai World Champion because the match-up took place in his homeland. That meant he had some familiar faces in the crowd supporting him in Shanghai.

Additionally, it meant they got a first-hand look at him in action on the global stage for martial arts, which may have gone a long way to convince them he has chosen a lucrative career path.

“Many of my family and friends came to watch me fight, which means a lot to me because I have never fought at an event like this before,” he says.

“After the bout, they were more certain of my fighting career, and they were happy for me and proud of me. We had dinner together and chatted together. We were very happy.”

As one of the youngest competitors in ONE’s all-striking league, the future is bright for Han.

He is set to become ONE Super Series’ most active athlete later this month when he meets Jakiri, a six-time Filipino Muay Thai champion, in Yangon for his third promotional bout.

A second consecutive victory should help him towards his grand ambitions in the organization, in which he has become a pioneer.

Han is the first Chinese stand-up martial artist to test his skills against the world’s best strikers in ONE Super Series, and he hopes to keep winning and eventually get a ONE World Title opportunity.

“I want to adapt to ONE steadily, and then challenge the champion of my division,” he says.

“I will try my best to be prepared to compete in Yangon, Myanmar on 26 October.

“My goal is to win or go home. It’s a great feeling to represent China on the international stage. I want my heart to race and get excited [in the ring]!”