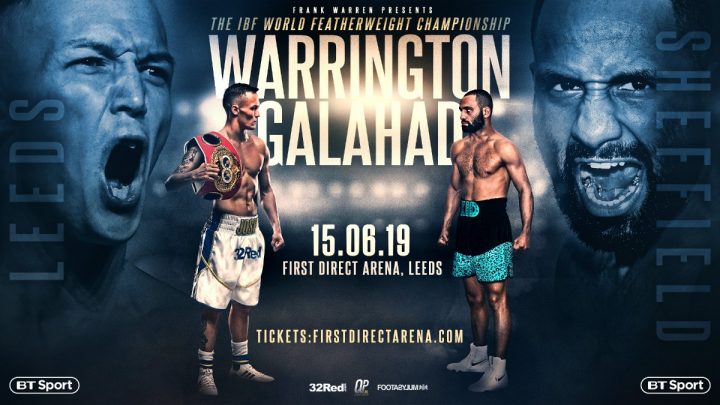 Josh Warrington successfully weighed in at 125.5 pounds on Friday for his title defense of his IBF featherweight belt against undefeated #1 IBF challenger Kid Galahad this Saturday night at the First Direct Arena, in Leeds, UK. Galahad (26-0, 15 KOs) weighed in at 125.75 pounds. Both fighters looked good.

The Warrington-Galahad fight will be shown on ESPN+ in the USA, and on BT Sport in the UK.

During the face off, both fighters went head to head like a couple of goats. Neither of them looked happy with the head-to-head stuff, so they broke it off quickly. They both looked like they wanted to start swinging at that point, which isn’t surprising because there’s been a lot of trash talking going on between them.

There are a lot of boxing fans that see the 29-year-old Galahad as an undeserving challenger. He’s not beaten anyone of note aside from Jose Cayetano and Toka Kahn Clary. Cayetano (21-6, 10 KOs) has lost in the past to world champions Scott Quigg and Leo Santa Cruz, but he’s not a great fighter. Clary (26-2, 18 KOs) has a nice record, but no wins over quality opposition. Before loss to Galahad, Clary had been beaten not too long ago by journeyman Jhon Gemino (20-11, 10 KOs) in a first round knockout in 2016.

It’s not a big deal that Galahad was able to defeat Clary, because he’s not an elite fighter. With Galahad’s weak resume, it’s impossible to know how well he’ll do against Warrington on Saturday. We know that Gemino did a much better job of beating Clary than Galahad did. Moreover, Quigg did superior job than Galahad in defeating Cayetano. Going by those facts, it’s likely Warrington beats Galahad on Saturday night.

This is the high point of Warrington’s career right now with him having recently beaten Carl Frampton, Lee Selby, Denis Ceylan and Kiko Martinez. Warrington dominated those four guys in winning easily. There were a lot of shocked boxing fans when Warrington defeated former two division world champion Frampton by a 12 round unanimous decision last December. At the time people believed that Frampton would have too much power, speed and experience for Warrington. Boy did Warrington prove them all wrong in winning by the scores 116-113, 116-112 and 116-112. Frampton was over-matched against Warrington, and there wasn’t anything he could do about it. Frampton was swinging for the fences with every punch, but it was no use. Warrington was too good for him.

In Warrington’s 12 round split decision victory over former IBF 126-pound champion Lee Selby last year in May, he didn’t receive full credit from fans. They maintained that Selby had problems making the 126 pound weight limit, and that’s why Warrington defeated him so easily. It’s true that Selby struggled making weight for the fight, but that’s not why Warrington beat him. Warrington was just the better fighter on the night. Selby is getting long in the tooth, and he’s clearly not the fighter he was a few years back.

Big things ahead for Warrington

A victory for Warrington on Saturday night could lead to bigger fights against the likes of Gary Russell Jr., Leo Santa Cruz and Oscar Valdez. Those are the matches that will bring Warrington a great deal of attention worldwide. Top Rank Boxing promotes WBO champion Valdez, and they would like nothing better than to match him against Warrington in a unification fight. It depends on what kind of risks Warrington is willing to take. If he wants to face the best, then he’ll need to take on Russell Jr., Santa Cruz and Valdez. Those are risky fights though, because those are highly talented fighters.