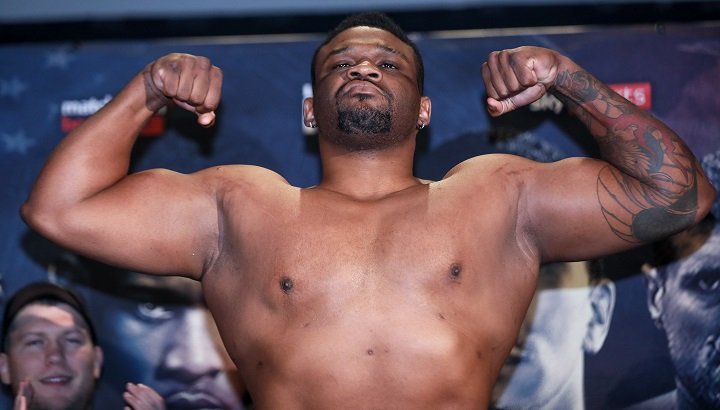 It seems more and more likely that WBA/IBF/WBO heavyweight champ Anthony Joshua will next fight Jarrell Miller, in New York in June. This is unless a big breakthrough in negotiations/talks occurs between promoter Eddie Hearn and either Deontay Wilder, Tyson Fury or Dillian Whyte. For unless one of these three comes to agreement, the pencilled in Wembley date of April 13 looks to be lost and AJ will have to fight elsewhere.

And there is one man and a location ready, willing and waiting to fill the gap. Big Baby Miller, the unbeaten and hugely vocal Brooklyn giant (as in 315 pound giant) – who was taken off his scheduled Friday, January 18 slot on the Demetrius Andrade card in NY – has been calling for a shot at Joshua for some time and he looks set to get what he wants. Or thinks he wants.

Hearn speaks highly of Miller, and an AJ fight in America seems to be a matter of time only. Hearn has told us “not to be surprised if Joshua fights Big Baby Miller in Madison Square Garden in June,” and in truth none of us would be.

Whyte could potentially still take the April 13 date at Wembley – yet whispers say Whyte is extremely unhappy with the cash offer he has been presented with, to the extent that he may even be “talking with other promotional parties” – but Wilder and Fury seem set to fight each other again next. So Miller is without doubt the frontrunner to challenge the 22-0 AJ next.

What kind of chance does he have in terms of victory?

Miller is, as we know, BIG. He also has fast hands, a good engine, a come-forward style and, perhaps his biggest asset, a big mouth. Miller WILL sell this fight in the months, weeks and days preceding it if it does get signed, make no mistake there. Indeed, the promotional hype ahead of this one would/will be hugely entertaining. But would/will the actual fight live up to the hype? Is Miller ready for Joshua (forget the fact that Miller hasn’t done anything to earn a shot at a world title; wins over Mariusz Wach, Gerald Washington, Tomasz Adamek, Johan Duhaupas and Bogda Dinu being Miler’s best so far)?

Joshua has had less pro fights than Miller, 23-0-1(20) has had, but he has faced and overcome the likes of Wladimir Klitschko, Joseph Parker, Dillian Whyte and Alexander Povetkin. In terms of quality of opposition there really is no comparison between these two. Miller, if he has a solid, even great chin, will be a real handful for anyone, AJ included, however, with his arm punches, his lack of an airtight defence and the constant worry that his weight will get the better of him and fatigue him (it hasn’t happened yet but there is still time, and has Miller been pressured severely in any fight yet?) Miller could be exposed and exposed badly by Joshua.

It’s an interesting match-up, it would/will be good to see Joshua box in America, and that pre-fight hype party will be something. But there is really only one winner in a fight between Joshua and Miller. Unless, that is, Big Baby has kept bis best stuff hidden until now and he can and will rise to the occasion big time in June.