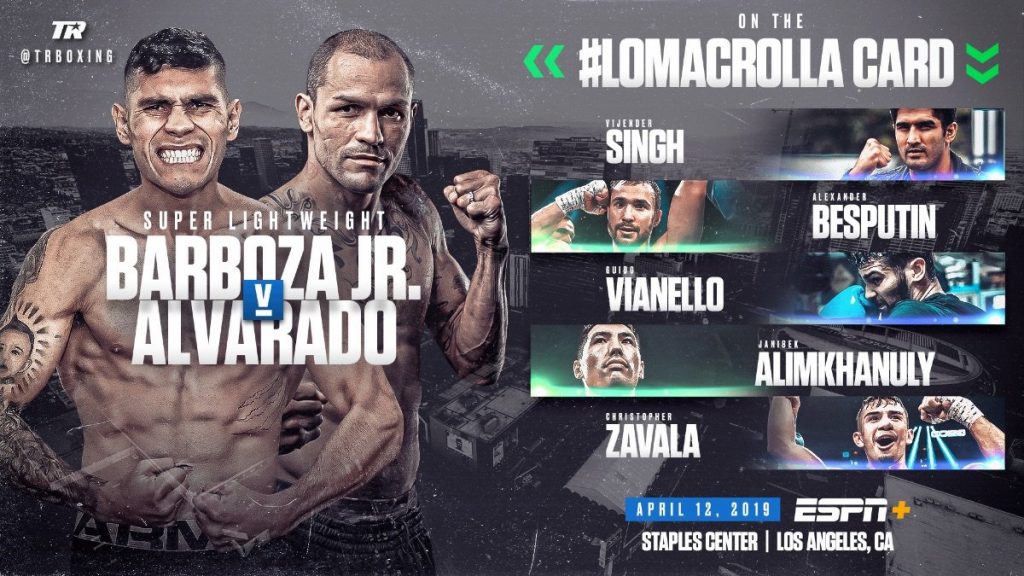 Undefeated super lightweight Arnold Barboza Jr. is a young contender closing in on a world title shot. Mike Alvarado wants another taste of world championship glory. Barboza, from South El Monte, California, will take on former 140-pound world champion Alvarado in a 10-round super lightweight bout on Friday, April 12 at Staples Center as part of the Vasiliy Lomachenko-Anthony Crolla undercard.

Lomachenko-Crolla and the 10-round light heavyweight battle between longtime WBO super middleweight champion Gilberto Ramirez and Tommy Karpency will stream live and exclusively in the United States beginning at 11 p.m. ET/8 p.m. PT on ESPN+, the direct-to-consumer sports streaming service from The Walt Disney Company’s Direct-to-Consumer & International segment and ESPN, which will mark its one-year anniversary since launching on the day of the fight. The entire undercard, including Barboza-Alvarado, will stream live on ESPN+ starting at 8 p.m. ET/5 p.m. PT.

“I am excited for this opportunity. We know it’s a dangerous fight and that Alvarado possesses power in both hands, but we are going to be ready for whatever he brings,” Barboza said. “It’s been a long time since I’ve fought at home, but I am ecstatic to fight here at Staples Center. It’s a dream come true. We are also excited to fight a former world champion like Mike, and we know he is going to be at his best.”

“Fighting on this card is an honor, and come April 12, the world is in for an exciting show,” Alvarado said. “I’m taking full advantage of this opportunity to bring me one step closer to securing my legacy as a champion.”

Barboza (20-0, 7 KOs), ranked No 3 by the WBO at 140 pounds, turned pro following a 95-fight amateur career and a stint as a fullback/linebacker at South El Monte High School. He went 3-0 in 2018, including a hard-fought 10-round decision over Mike Reed (23-1 at the time). In Alvarado (40-4, 28 KOs), he is facing a modern-day action hero who has thrilled boxing fans with his willingness to go toe-to-toe. He was one half of the 2012 Fight of the Year versus Brandon Rios, won by Rios via seventh-round TKO. Alvarado scored a unanimous decision in the immediate rematch but proceeded to lose three in a row versus Ruslan Provodnikov, Juan Manuel Marquez, and Rios in the rubber match.

After overcoming personal demons, Alvarado returned to the ring in March 2016 ready for one final run. Since then, he is 6-0 with 5 knockouts. In his previous bout, Oct. 13 on the Terence Crawford-Jose Benavidez Jr. undercard, he blasted out Robbie Cannon with a vicious overhand right in the second round.

Also on the card:

Top welterweight contender Alexander Besputin (12-0, 9 KOs) will defend his USBA title against Alfredo Blanco (20-7, 11 KOs) in a 10-rounder. Besputin is currently ranked No. 1 by the WBA.

“I am a top welterweight, and now that I’m ranked No. 1 by the WBA, I can’t be avoided by the champions for long,” Besputin said. “I am ready to put the welterweight division on notice.”

Janibek Alimkhanuly (5-0, 2 KOs), a former amateur standout from Kazakhstan, will face the rugged Cristian Olivas (16-4, 13 KOs) in a 10-rounder for the vacant WBO Global and WBC Continental Americas middleweight belts. Two of Olivas’ four losses have come via split decision, and he has never been knocked out as a pro.

“I am training hard with Buddy McGirt, and I know that Olivas is a tough customer who will come forward and make for a great fight,” Alimkhanuly said. “It is a dream come true to fight at Staples Center, and I want to give all of the great fans in Los Angeles a spectacular show. I will show everyone what Qazaq boxing style is all about.”

Italian heavyweight Guido “The Gladiator” Vianello (2-0, 2 KOs), who represented his homeland at the 2016 Rio Olympics, will fight Lawrence Gabriel (3-1-1, 2 KOs) in a six-rounder.