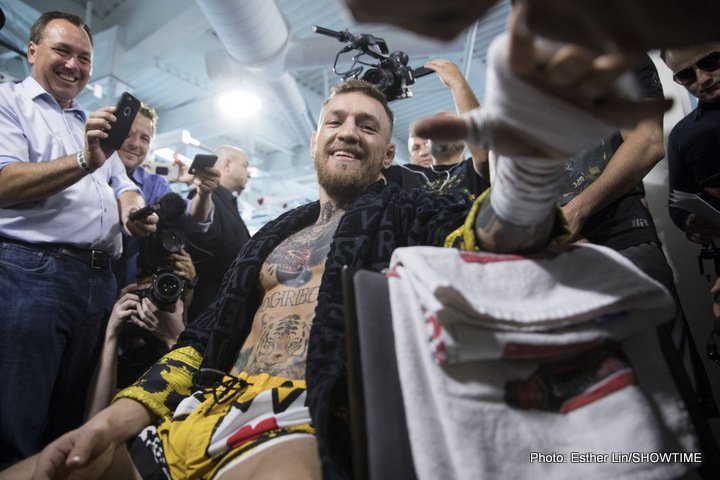 By Jim Dower: Conor McGregor says he’s going to knockout Floyd Mayweather Jr. really BADLY on August 26, especially if he’s allowed to use 8oz gloves. The Nevada State Athletic Commission is still deciding on whether to permit the two fighters to use 8oz gloves rather than the standard 10oz one for junior middleweight contests. The fight will be taking place at 154.

McGregor thinks he has a good chance of knocking Mayweather out in 2 rounds with the 8oz gloves. McGregor sees the 40-year-old Mayweather being down on the canvas and badly hurt in the 1st round. McGregor thinks that Mayweather will likely make it out if round 1 due to the referee will give him time to recover from the knockdown.

Mayweather will then have a break between round 1 and 2 to try and recover. But in the 2nd round, McGregor says he’ll finish off Mayweather for the knockout win. If the two use 10oz gloves, McGregor sees Mayweather making it to the 4th round before he lowers the boom on the aging former 5-division world champion.

“Trust me, if we’re eight ounces, I’m struggling to give him two rounds,” McGregor said. “That’s the God’s honest truth. The only reason I maybe give him two rounds is because in this game, the referee stops me pounding his head into the canvas and he gets ten seconds to recover. That’s the only reason he might get to the second round. If it’s ten ounces, maybe four rounds. I will knock him out bad – he is too small,” McGregor said.

Well, anything is possible, including an inexperienced fighter like McGregor knocking out Mayweather. If this fight had taken place 2 years ago when Mayweather was still fighting on a regular basis, I would say that McGregor, 29, would have zero chance of pulling off a big upset against the “Money” man, but right now it’s impossible to know how much he has left.

Is Mayweather at 60 percent enough to beat a young and in his prime McGregor, it’s difficult to answer that question. McGregor is in the zenith of his career right now. He’s not injured and over-the-hill like Mayweather’s last quality opponent Manny Pacquiao in 2015. Mayweather beat a past his prime Andre Berto in his last fight in September 2015, but that wasn’t a good fighter. Berto hasn’t been at his best since 2010.

McGregor’s UFC boss Dana White surprised the boxing world in releasing a clip of McGregor’s sparring video with former world champion Paulie Malignaggi on Saturday. The video made McGregor look very good and Malignaggi quite bad. Malignaggi complained about the edited video on his Twitter account on Saturday, but few boxing and MMA fans paid him any mind. The video speaks for itself.

McGregor was punching poor Malignaggi at will with shots to the head without any letup. There are calls for the full video of the sparring to be released to the public, but that’s not going to happen. It can’t happen. The reasons are obvious. McGregor can’t show what his game plan is for the Mayweather fight. If the video is released in its entirety, it would show McGregor’s full skill level or lack thereof, and it would also give away his game plan potentially.

Another reason why the full video won’t be released is because it might make McGregor look bad at times. McGregor will likely look far better than the out of shape Malignaggi, who went into the training camp in less than tip top shape. McGregor had a huge advantage over Malignaggi in terms of conditioning during the sparring sessions. Mayweather hadn’t been inside the ring since his 8th round stoppage loss Sam Eggington on March 4. Malignaggi was thick around the middle and puffy looking for the sparring sessions. Malignaggi wasn’t as out of shape as he’s looked in the past between fights, but he definitely wasn’t in the same kind of physical condition that McGregor was in for the sparring.

For McGregor to knockout Mayweather, he’s going to need to close the distance and let his hands go. He’s probably not going to be able to land the long left hand shots that he was hitting Malignaggi with. Mayweather will likely lean away from anything McGregor throws on the outside to prevent him from connecting. McGregor will need to get near enough to Mayweather for him to connect with his shots with any degree of accuracy. That means that McGregor will need to take some of Mayweather’s shots while he’s coming forward.

Mayweather isn’t a huge puncher, but he has a way of gaining the respect of his opponents when he connects with his right hands when they’re coming at him. Pacquiao couldn’t do it. He kept getting nailed with Mayweather’s fast right hands repeatedly. If Mayweather still has a good portion of the hand speed that he possessed for the Pacquiao fight, then it’s going to be extremely difficult for McGregor to get close enough to land anything without paying a huge price each time he goes on the attack. McGregor won’t be able to fight foolishly against Mayweather because he’ll make him pay a heavy price for each attempt he makes in attacking him with power shots.

Today’s video release of the McGregor-Malignaggi sparring highlights will likely do little to change the minds of boxing and MMA fans about who will be the winner of the fight. The fans have already made up their mind by now that McGregor has no chance of winning. The only thing that today’s release of the sparring video will do is get more fans to purchase the fight on Showtime PPV, which isn’t a bad thing as far as McGregor goes. He wants to make as much money as possible for the fight. He’s reportedly set to make a minimum of $100 million.

With the video of the McGregor-Malignaggi sparring already having been seen by millions of boxing and MMA fans, the fence sitters may choose to pay the high asking price to watch the Mayweather-McGregor fight on Showtime PPV. The fight is selling for $89 to $99 on PPV. That’s not chump change. The fans will have to pay as much as $30 above what they normally pay to see PPV fights. If the fans see the fight as an event and not a true fight, then many of them won’t want to purchase the fight. That would be bad news for McGregor, because he needs as many boxing and MMA fans to purchase the fight as possible so that he can take home a huge check for the fight.

If McGregor beats Mayweather, it’ll be one of the biggest upsets in boxing history. McGregor is making his pro debut against a fighter with a 49-0 record. You don’t see upsets in cases where a fighter making his pro debut is going against a top level guy. The only time you might is if you’re talking about an Olympian with superb credentials like Vasyl Lomachenko is taking on a top fighter. Even Lomachenko was beaten when he made the mistake of taking on an accomplished pro in Orlando Salido in his second fight as a pro. McGregor’s experience is limited to his training camp for this fight and his background in the UFC. Whether that’s enough to beat a once great fighter like Mayweather is what we’re going to find out on August 26.