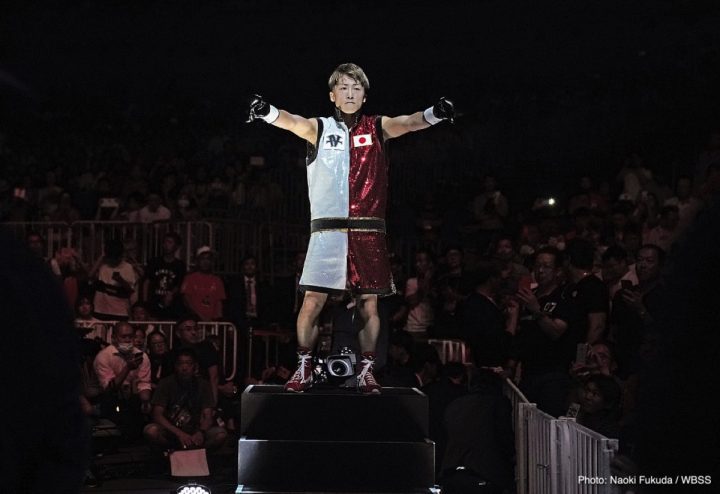 Top Rank will be signing WBA World bantamweight champion Naoya Inoue after the World Boxing Super Series 118-pound tournament finishes up. Top Rank boss Bob Arum has plans on matching the unbeaten Inoue (17-0, 15 KOs) against former WBA Super World bantamweight champion Ryan Burnett, who he recently signed to his stable. Burnett (19-1, 9 KOs) will be fighting this Friday night on May 17 against Jelbirt Gomera (14-5, 7 KOs) in a 10 round fight for the vacant WBC International super bantamweight title at Ulster Hall in Belfast, Northern Ireland.

This is a good signing by Top Rank of adding Inoue to their promotional team, as long as they’re going to match him against quality fighters. Top Rank recently signed former heavyweight champion Tyson Fury, and they’re matching him weakly against Tom Schwarz on June 15. Top Rank is expected to put Fury in with another poor opponent in September as well with hopes that the U.S boxing fans will fall in love with the 6’9″ British heavyweight. Inoue become a star in the U.S, but it won’t to it by fighting the likes of Ryan Burnett.

Inoue will be fighting his semifinal fight in the WBSS tournament this Saturday night on May 18 against IBF bantamweight champion Emmanuel Rodriguez(19-0, 12 KOs) at The SSE Hydro in Glasgow, Scotland. Inoue is expected to beat the 26-year-old Rodriguez, and then move forward to fight WBA Super World bantamweight champion Nonito Donaire (40-5, 26 KOs) in the final of the WBSS tournament later this year.

Donaire defeated Burnett by a fourth round injury stoppage in their quarterfinal match in the WBSS tourney in Glasgow. Burnett suffered a back injury during the fourth round that caused him to take a knee. Burnett got back up, and took shots from Donaire as the round ended. Burnett was then taken out of the ring on a stretcher. Since that fight, Burnett hasn’t fought. He’ll be coming back on Friday to face the little known 26-year-old southpaw Gomera in a 10 round fight. Gomera has lost four out of his last six fights. Burnett should be able to win this fight over Gomera without any problems unless he suffers another back injury during the fight.

Burnett is expected to fight WBO bantamweight champion Zolani Tete (28-3, 21 KOs) first and then Inoue. Top Rank might want to think twice about putting Burnett in with the 31-year-old Tete before they match him against Inoue. Burnett will likely lose to Tete, and then there won’t be any point in matching him against Inoue. It’s unclear how many fights Top Rank has signed Burnett up for with their company. If they’re serious about wanting to put Burnett in with Tete and Inoue in back to back fights, it would be a good idea for the contract with Ryan to be a small one of just three fights. Burnett can beat the likes of Gomera, but Tete and Inoue are another matter.

Inoue has captured world titles at 112, 115 and 118. He hasn’t beaten any big name fighters unfortunately. He left the super flyweight division without facing Srisaket Sor Rungvisai or Juan Francisco Estrada.