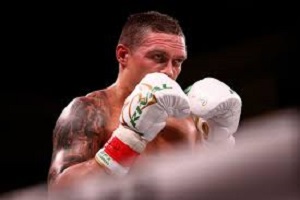 Usyk is coming. Really, this time for sure.

Eddie Hearn tells the media that Oleksandr Usyk vs. Dereck Chisora, originally planned for March 28th before the undisputed cruiserweight king suffered an elbow injury, is “a done deal” for May 23rd at London’s O2 Arena. Stateside viewers can watch on DAZN, UK viewers on Sky Sports PPV.

Usyk’s (17-0, 13 KO) heavyweight run hasn’t been quite the blitzkrieg his handlers hoped for. He was slated to debut against Carlos Takam in May of last year, only to injure his bicep less than a month from fight night. While he recovered, Takam signed with Star Boxing, ultimately scuttling the matchup and leaving Usyk to plan an October clash with kickboxing veteran Tyrone Spong instead. Then Spong failed a drug test, so Usyk settled for a seventh-round finish of Chazz Witherspoon.

“Del Boy” Chisora (32-9, 23 KO) continues to truck along after 13 years in the game, bouncing back from his brutal knockout loss to Dillian Whyte with a 3-0 2019. His last two fights saw him blow up Artur Szpilka in scary fashion and end David Price’s hopes for a career resurgence.

Now let’s just focus on keeping everyone intact for the next three months.