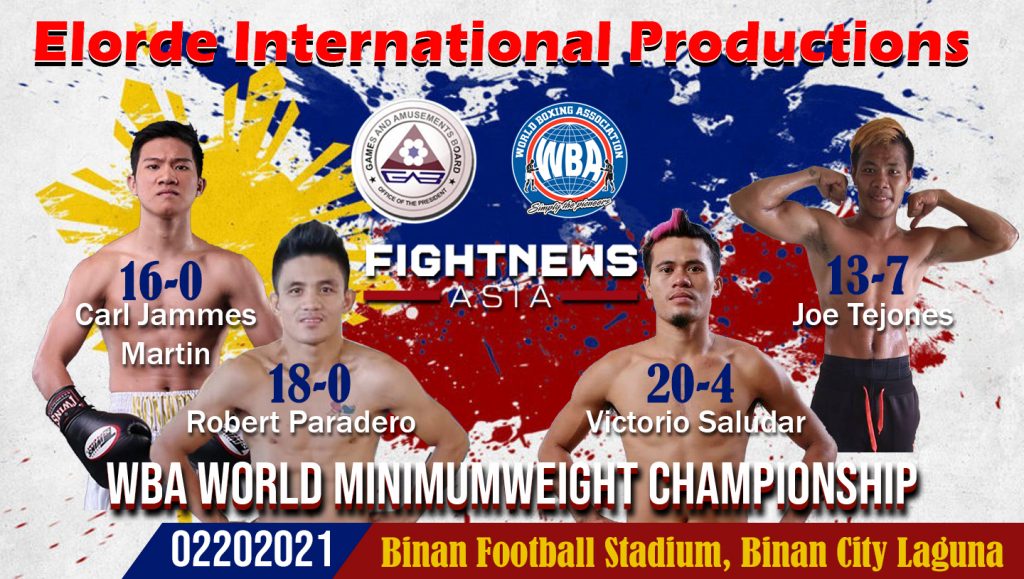 Prediction Saludar vs Paradero Split 5050 according to Abainza

Victorio “Vicious” Saludar (20Win 4Loss 11KOs) and Robert “Inggo” Paradero (18Win 12KOs) are both ready to step into the ring to fill the title of World Boxing Association World Minimumweight Title this coming Saturday, February 20, 2021. It will be presented by Gabriel “Bebot” Elorde Jr. of Elorde International Productions and will be broadcasted on PTV. Also live on Facebook and Youtube, coming straight from Binan football stadium in Binan City, Laguna.

“Robert Paradero vs Victorio Saludar is a close match – 50/50 chance for both fighters” according to veteran WBA ring official Silvestre Abainza.

Abainza will not be around during the WBA world minimum title due to restrictions imposed by IATF, but optimistic on the selected WBA ring officials. He opted to select those officials who have attended the WBA convention in China. This includes Nowel Haduca and Gerald Bassig.

Haduca, a veteran, has been in the boxing industry for thirteen (13) years with experience in judging and refereeing major boxing bodies.

Bassig, on the other hand, has also been selected to officiate three times to the WBA Asia title. He also participated in other major boxing bodies in Asia such as ABF, WBO Oriental youth, WBC ABCO, and WBC World Youth Championship in India.

The matchmaker of this fight is Patrick Pepito Pante