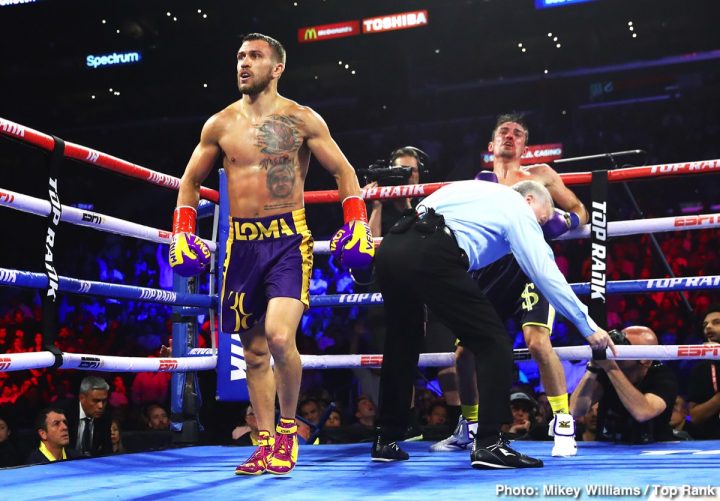 Lomachenko and Campbell are both Olympic gold medalists. That makes this fight an intriguing one on paper. If Top Rank can promote it well, it could bring in good ratings in the U.S.

Hull is a venue was mentioned initially as a place that Hearn wanted to stage the fight, but it looks like it’s not longer viable opportunity. Campbell would bring in a big crowd if the fight with Lomachenko were staged in Hull.

Lomachenko, 31, destroyed former WBA lightweight champion Anthony Crolla in a fourth round knockout on April 12 in Los Angeles, California. It was easily the fiercest display of punching that Lomachenko has exhibited during his six-year pro career. He fought like he had a chip on his shoulder or something. Perhaps the comments that fellow Top Rank fighter Teofimo Lopez had been making leading up to that fight about Loma being old, injury prone, and on the downside of his career energized him to a point where he wanted to make an example of Crolla. Whatever it is, Lomachenko was like a possessed from the opening bell with the way he was attacking Crolla with huge shots to the head and body. Crolla was knocked down in rounds three and four in the fight before the match was waived off by referee Jack Reiss at 0:58 of the 4th. Crolla had been in with hard punchers before, and none of them had done to him with Lomachenko did. It wasn’t that Lomachenko was more powerful than them. It was more about his punch placement, timing, and the all out manner that he was attacking Crolla that made the difference in the fight.

The goal for Lomachenko is to capture the WBC title, and then go after IBF belt in the first quarter of 2020. Teofimo Lopez is expected to face IBF lightweight champion Richard Commey in late 2019 to after that title. The winner of the Commey vs. Teofimo fight will be Lomachenko next year. Campbell an spoil Lomachenko and Top Rank’s big plans if he can pull off an upset against the Ukrainian talent by beating him on August 31.