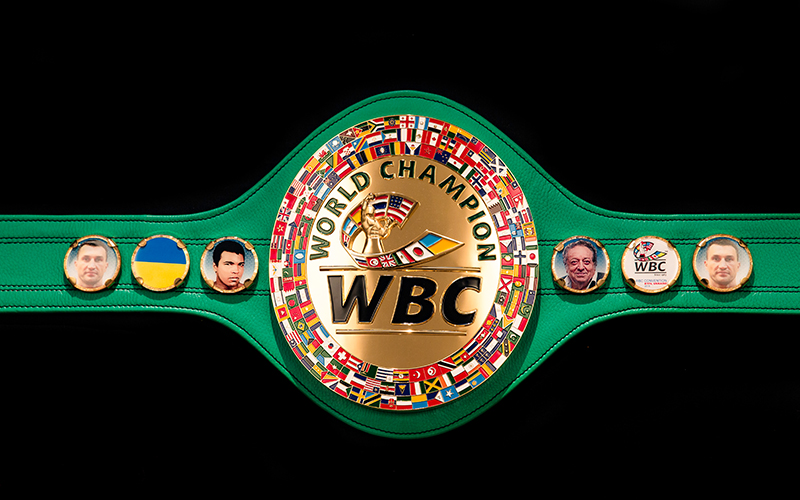 WBC President Mauricio Sulaiman greeted a team of young amateur boxers from Argentina, who`ve been welcomed on an educational, cultural and sporting exchange, keen to learn more about the Noble Art, from world class coaches in Mexico, presenting them green sashed gold medals.  Mauricio expressed gratitude to the WBC Amateur Committee, for extending the hand of friendship, making this opportunity possible, also praising the dedication and sacrifices of the five young  South American fighters, who will compete and learn here.

In the professional sphere, the WBC has organized seventy eight world title fights this year. It also helped and supported an initiative by Sylvester Stallone to gain a Presidential Pardon from Donald Trump for legendary Jack Johnson, who was hounded and unjustly convicted of a crime he never committed, serving a year jail time. Sly has been named Man of the Year by the WBC.

Mauricio andHector Sulaiman who`s the President of Scholas Occurrentes in Mexico had an audience with Pope Francis in the Vatican, outlining all of the events and seminars which have been organized throughout the year throughout Mexcio, supporting the development of young people, who have integrated from all spheres of society with arts, culture and social programs, investigating issues which challenge everyday life. Working together with youthful enthusiasm they`re providing a brilliant ray of hope for the future.

Also the event lauding Saul Canelo Alvarez as Professional Sportsman of the Year in Mexico. The first time a boxer has received this accolade, with the Trophy presented to this Young Captain of Boxing, by Mexican President Enrique Pena Nieto.

Hundreds of thousands of people visited the WBC Exhibition at Terminal One of the Benito Juarez International Airport outlining its history and its fabulous array of World Champions, with an exhibition of photos, Green and Gold Belts and testimonies.

A particularly memorable highlight,  was the visit of Big George Foreman to receive a medal commemorating the fiftieth anniversary of his gold medal in the 1968 Olympics.  George used the event to stress his whole hearted support for amateur boxing continuing as an Olympic sport, saying it was his fundamental springboard to success in the pro ranks, in which he stood out, with his immense power and self belief, winning back the heavyweight crown twenty years after losing it to the Greatest Muhammad Ali.

Mauricio went to the United Nations in New York giving a presentation on how Sports can help young people in society, fostering a commitment and positive lifestyle.  He has also visited the bedside of former WBC light heavyweight Adonis Stevenson who has undergone brain surgery, and remains in an induced coma.

He concluded by praising the multi tasked work which is done seven days a week by the WBC team in the Mexico City Offices and worldwide saying they reflect the strength, honor loyalty  and vitality of Boxing`s biggest and greatest organization.  All of this in just twelve months!