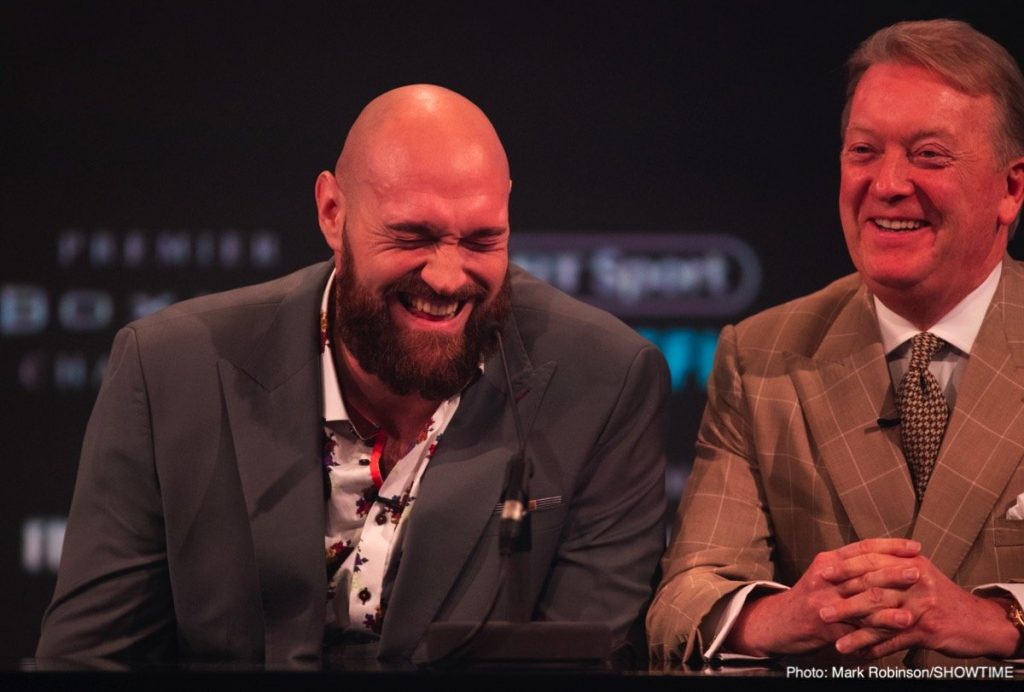 Heavyweight rivals Deontay Wilder and Tyson Fury cane together for the first of their scheduled pressers yesterday in London (it’s New York today) and it was, as expected, a whole lot of fun. Fury, in typical boisterous mood, got off some good lines – “I’m living in your head, rent-free,” and, in response to Wilder shoving him when things were seemingly on the brink of getting really ugly, “My wife pushes harder than that,” – but Wilder generally appeared unmoved, ice cool even.

Fury has made a lot of the successful mind games he used in the lead-up to his big 2015 fight with then-heavyweight champ Wladimir Klitschko, and the unbeaten linear champ says he has already got WBC ruler Wilder “mentally baffled.” But has he? As much as the head tricks worked with Klitschko (who was indeed baffled by the antics of Fury; both in and out of the ring) they may not work on Wilder.

At times during yesterday’s presser, and then later, on the UK TV shows the two giants appeared on, Wilder was smiling at a good deal of Fury’s talk, laughing out loud even. And, according to a report from The Star, when the cameras went off inside the BT Tower where the London press conference was held, the two “rivals” were all smiles together, exchanging compliments. Is there the genuine bad blood between these two it may have appeared there is?

READ  Tyson Fury: If I Were You, Joshua, I Would Avoid Me; I’d Jab Your Face Off!

Wilder seems, to this writer anyway, to have not been sucked in by any of Fury’s attempt at mind games. There is still time of course, and we have only had the first step on the promo road for the December 1st fight, and Fury can be guaranteed to keep it going with his own blend of insults, compliments, nastiness, lack of respect and also full respect. Maybe Fury himself doesn’t even know how he feels about Wilder.

But if Fury cannot get to Wilder before the fight, if he cannot rattle him the way he did Klitschko (and failed to do to Steve Cunningham) who knows how this will affect HIM. Wilder asked Fury yesterday if Fury has “ever looked into the eyes of a killer.” Fury shot back with am ‘I’m not fazed’ answer, but for a second or two, maybe, just maybe, he was indeed rattled and maybe he felt a small chill down his spine. Wilder may also have got to Fury, just a tad, when he told Fury he “had better go get Peter.” Wilder was referring to Fury’s uncle and former trainer, the man who has since split with Tyson; the man who was there and was the mastermind behind Fury’s big upset win over Klitschko.

Wilder stated how Fury needs his old trainer if he is to have any chance at all of being able to fight the way he did in Germany. Was it round-one to Wilder yesterday? Or was it all-even?

Let’s see what unfolds at today’s presser in New York.