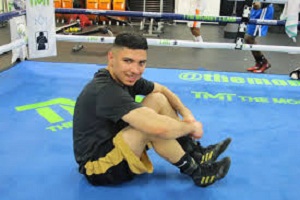 Cortes, a Vegas native, is 21 years old and has fought five times at Sam’s Town already, so he’ll be in a familiar place. The 27-year-old Dyer is from Baltimore, and has fought all 10 of his bouts on the east coast. He’s won five straight following a 2018 loss, and has already fought twice this year, in February and March.

How does it feel having your first televised fight on Showtime on April 5?

Cortes: “It feels good, but at the same time I feel this is part of my destiny. I grew up watching ShoBox fights, and I’ve always secretly known I was going to end up there, on TV. Now that it’s actually here, I feel like this is where I’m supposed to be. The moment is here and it’s really time to shine. Tune-in on April 5th, a star will definitely be born that night.”

Dyer: “I am excited at the possibility of being able to showcase my boxing to the viewing audience and show people what I can do. But other than that, it’s just another day at the office. Once that bell rings, it will be me and my opponent in the ring. The crowd, the lights, and the cameras will all get drowned out by that crazy voice that has always been inside my head telling me to push, work, fight, and never give up.”

On the progress of training camp:

Cortes: “My training camp has been going really good. It’s the longest camp I’ve had. I’ve been training for about 10 weeks. You can expect me to be 100 percent come April 5th.”

Dyer: “Training camp has been going great so far. I am in the best shape of my life. I am a gym rat and I’m always in shape. Even when I don’t have a fight lined up, I train twice a day at the gym and run five to 10 miles every day. It’s just a routine that I have always stuck with. Plus, I just had a fight on March 2, so I have pretty much just stayed in the gym and I’m feeling very sharp.”

Are you doing anything new this camp or making any adjustments to prepare for this fight?

Cortes: “My strength and conditioning has been very strict. More so than in previous camps. I’ve been focusing on my nutrition. Everything is going to be right in place when fight night comes around.”

Dyer: “I have always had tough fights and have always been able to overcome challenges. Inside and outside of the ring. The only thing new about this fight is that it is my first eight-round fight. I’ve been training to go hard and to go the distance.”

On what they know about their opponent:

Cortes: “I don’t see anything special on Dyer. I just see another opponent. He’s just there for me to beat. I see that he is tough but comes with nothing special.”

Dyer: “I don’t know much about Andres Cortes and, frankly, had never heard of him before I was offered this fight. Since then, I have looked him up and I know he is a good fighter. But I don’t think he has ever been taken into deep waters. How a fighter deals with adversity is what distinguishes a good fighter from a great fighter. I have no doubt about my grit and determination – I have always had abnormal amounts of it. Part of it may be from my upbringing and part of it may be in my DNA. But I don’t think even Andres Cortes himself knows whether he has that kind of grit and determination because he has never been tested. I will gladly administer the test.”

On what a win from this fight will do for their career:

Cortes: “It will definitely set things higher; it will set higher standards for me. The sky is the limit from this fight on. Just to getting my name out there will bring a lot more opportunities for me.”

Dyer: “Winning this fight will change my life. I am approaching this fight, both mentally and in training, like it is the unified world title – like it is the fight of my life. I have been through so much and sacrificed so much both in and out of the ring to get to where I am now. This is my opportunity to finally show the world what I can do and kick open the doors to my future in boxing. I don’t plan on knocking. I plan on kicking the doors wide open. Winning this fight will catapult my boxing career and, hopefully, I can focus full-time on boxing.”