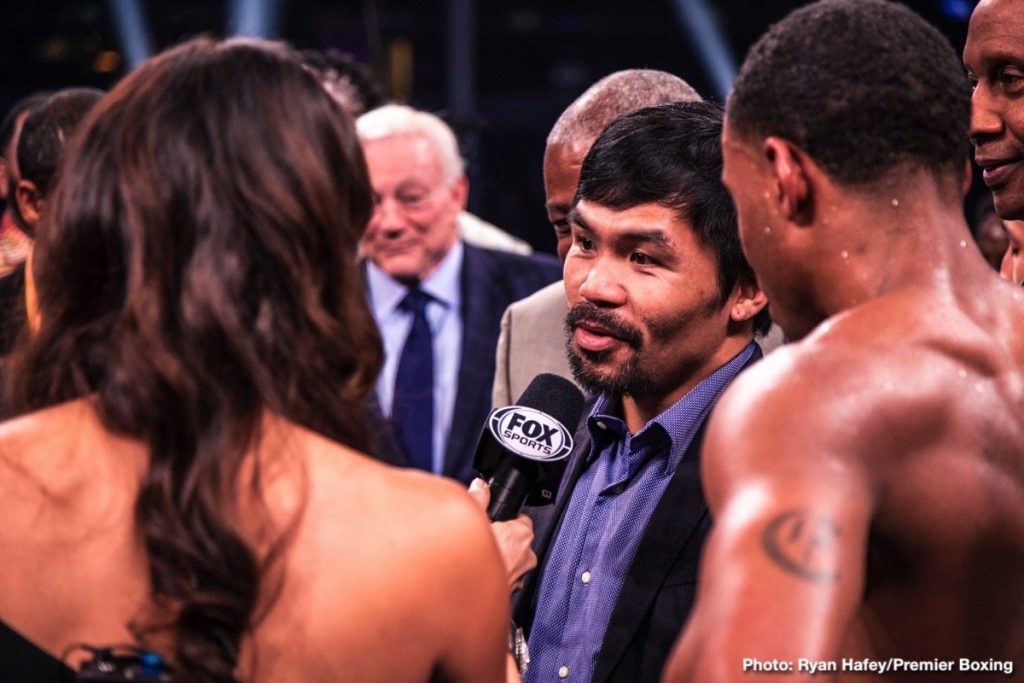 Both superstars Manny Pacquiao and Floyd Mayweather were in attendance for Saturday night’s big but ultimately one-sided fight between welterweight ruler Errol Spence (champ of the IBF but perhaps soon to be undisputed, providing the other champions face him) and Mikey Garcia, yet only one of them showed any inclination to want to fight again. Mayweather, who knows he can pick up a bundle by taking an easy and safe exhibition, is seemingly done – content.

Pac Man feels this way himself, suggesting that Floyd is enjoying his retirement and that he “may not want to fight younger fighters like me.” Pacquiao stated that he wants to “stay active and fight again in the summer.” “Real fights against real fighters,” Manny signed off with.

It’s clear Mayweather wants no part of young buck Spence, and who can blame him at age 42? Mayweather might not want any part of Pacquiao in a return fight either. If so, where does this leave Manny? Unlike Mayweather, Pacquiao IS interested in tackling the seemingly quite untouchable Spence; this despite the fact that he is no young man or anything close to it at age 40. In terms of a far more even and level playing field, however, a Mayweather/Pacquiao II makes sense, far more so than a Spence/Pacquiao fight makes any sense.

Sure it would be a great scalp on the record of Spence, but Pacquiao deserves better. Who would really, honestly be willing to give Pacquiao a serious chance against the 25-0 Spence? As good as Pacquiao looked last time out against the much younger Adrien Broner, Broner is no Spence. At all.

Pacquiao can still win fights, yes, but he said himself a while back that the real reason he is sticking around and not retiring is because he wants – he needs – that shot at redemption against Mayweather. But if Floyd won’t play ball and grant his fellow all-time great a rematch, Pacquiao will be forced to look elsewhere if he will not call it a day. But the Filipino icon should not be looking at challenging Spence. The peak Pacquiao would have had his hands full against Spence. Come to that, so would Mayweather.