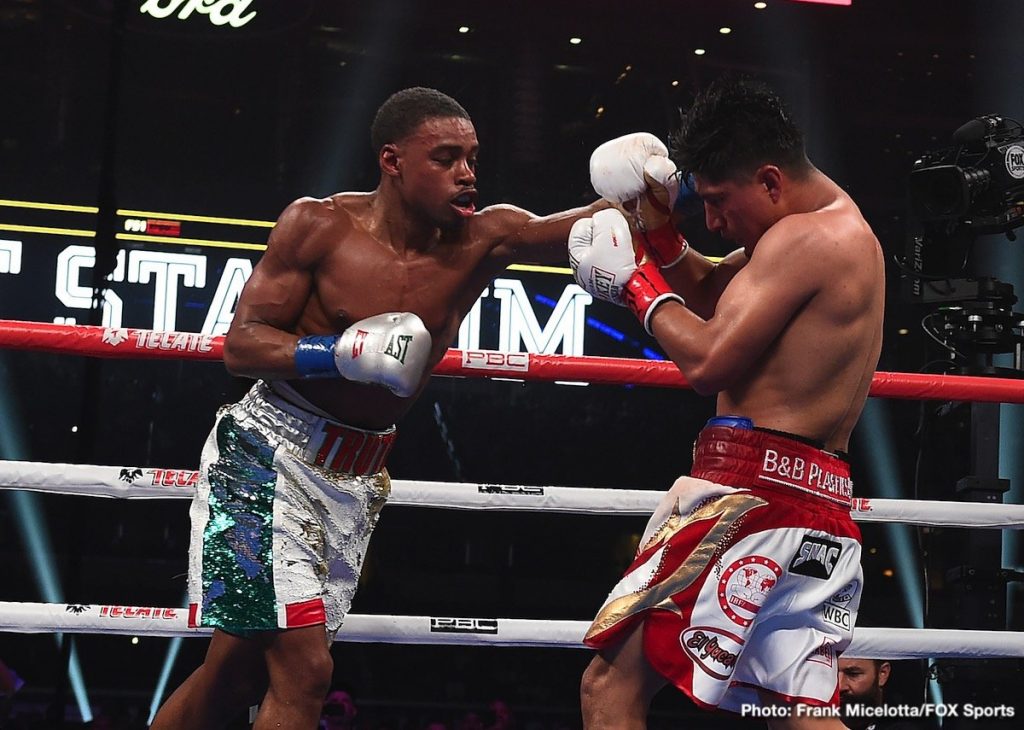 Chris Algieri isn’t surprised by how easily Errol Spence Jr. defeated Mikey Garcia last Saturday. Spence had it easy over his much smaller opponent in beating him to the punch for 12 rounds on Fox Sports PPV. Spence used his size, reach and power advantage in front of a big crowd of 47,525 at AT&T Stadium in Arlington, Texas.

According to Algieri, the Spence vs. Garcia fight went just as he expected it to. The only thing that played out differently than what Algieri imagined was how IBF welterweight champion Spence (25-0, 21 KOs) was able to limit the previously unbeaten Garcia (39-1 30 KO) to only 75 punches laded in the entire 12 round fight.

“It kind of went the way I expected,” Algieri said to Fighthype in analyzing the Spence vs. Garcia fight. “You know there’s weight classes for a reason. Spence is a very big guy. But honestly, Spence showed things that I knew he had, but a lot of people probably slept on. He’s a technician in there. He’s got good skills. He showed good defense last night. He kept Garcia to landing less than 10 punches per round, which for such an offensive guy like Mikey, that’s really impressive. People were shutting him [Mikey] out, saying he wasn’t going to be able to compete. He made 12 rounds against a murderous puncher, and a guy that stops a lot of people, so I give him that,” Algieri said.

On paper, the four division world champion Garcia was supposed to have been the best fighter that Spence has ever faced during his seven-year pro career, but in reality, Garcia wasn’t as competitive as Kell Brook was in his fight with Spence two years ago. Being four inches taller, with a longer reach, and more weight made Spence too big for Mikey. Although Mikey did bulk up for the fight, but a lot of the weight that he put on was centered around his midsection. All the strength training that Mikey did at SNAC was for nothing. Someone should have done a better job of counting the calories Garcia was ingesting, and put him on a better cardio program so that the weight that he packed on didn’t wind up around his midsection.

Manny Pacquiao could be next in line for Spence to fight.
Algieri doesn’t like Manny’s chances against Spence. He sees that as a case of Pacquiao fighting a guy that is too young, too strong and too big for him.

“You can never count out a guy like Manny Pacquiao. He’s an incredible athlete, but I just got Spence at this point,” Algieri said in talking about who would win a fight between Pacquiao and Spence if it happens. “He’s [Spence] younger, fresher, stronger, and their in his weight class. That’s a tough fight for Manny,” Algieri said.

Pacquiao, 5’6 1/2″, is about the same size as the 5’6″ Mikey Garcia, and he’ll have the same problems getting to Spence if he chooses to take the fight. Garcia looked helpless against Spence when he was fighting him from the outside. It wasn’t until Spence started to attack Garcia in close that he was able to land a few shots. Spence gave Garcia a real thrashing when he began to press him starting in the ninth round. If Spence does the same thing against Pacquiao, it’s possible that he could produce an early knockout. Pacquiao is easier to hit than Garcia, and his punch resistance isn’t as good.

“My my mind on that fight [Spence vs. Crawford]; I’ve always thought Spence wins that fight, but the more time Crawford spends at welterweight, the more I’m seeing that gap close,” Algieri said in analyzing a possible fight in the future between Errol Spence Jr. and Terence Crawford. “It needs to happen, but Spence showed some things last night in terms of his boxing ability and defense that maybe makes that fight even more lean towards Spence,” Algieri said.

Th 5’8″ Terence Crawford is weaker than Spence, and he’s not going to be able to outbox him from the outside like he’s done against other opposition. The longer it takes for the Spence-Crawford fight to be made, the more it favors Spence, who is younger than the 31-year-old Crawford, and looking more solid. Crawford was getting hit a lot in his last fight against Jose Benavidez Jr., and he wasn’t as dominating as he’ been when he was fighting limited guys at 140. Top Rank isn’t going out of their way to put Crawford in with good opposition since he moved up to 147, and he’s wasting a lot of his career on soft fighters. Since moving up to welterweight, Crawford has beaten Benavidez and Jeff Horn. Crawford is now scheduled to face his prime Amir Khan, who has been on the downside of his career since his losses to Lamont Peterson and Danny Garcia in 2011 & 2012.