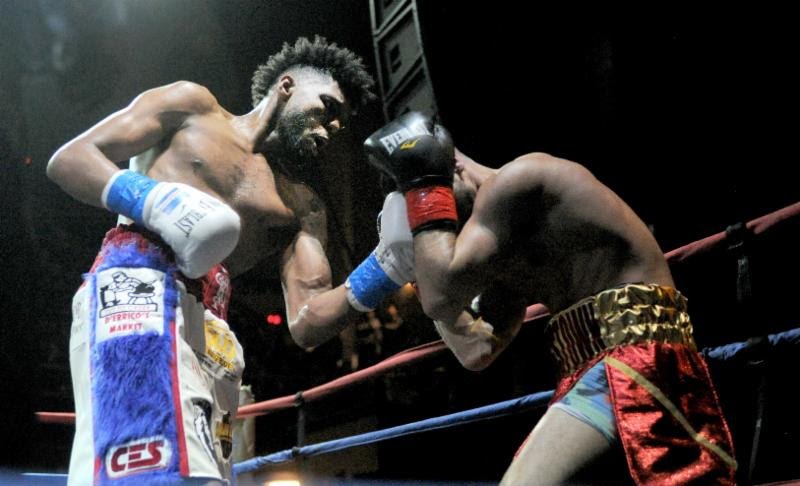 “Everything turned out great for me. I started to use my jab in the first three-rounds and he could not do anything against it,” said Ball. “I wanted to knock him out, but I figured why rush it. He is a tough kid. I should have gone to the body more.”

Ball aggressively stalked Rosenberger throughout their bout and was the more active fighter. He displayed an effective jab and worked the body well. Ball connected on the harder shots, including several right hooks to the head that badly staggered Rosenberger in the third-round. Rosenberger fought well in spots with hard combinations, however, he was not consistent enough and took significant parts of the rounds off.

“It feels good to have this belt,” said Ball. “I feel like I have been the best middleweight in New England for a long time. I dictated the pace of the fight and did my job.”

Ball won almost every round on the judges’ scorecards as he improved to 12-1-2, 8 KOs. He has won three in a row following his unanimous decision loss to Alexis Gayton last year. Rosenberger dropped to 4-7-4, 1 KO.

This fight card, “Every Man for Himself” was promoted by Shearns Boxing Promotions from The Palladium in Worcester, Massachusetts. Their next fight card will be on June 14th at the same venue when they team up with Rivera Promotions Entertainment as former three-time, two-division world champion, Jose Antonio Rivera (42-6-1, 24 KOs) will headline the show as he fights for the fifty and presumably, final time against an opponent to be named at a later date.

In the co-feature, welterweight, Wilfredo “El Sucaro” Pagan scored a fourth-round unanimous decision over Carlos Galindo on all three judges’ scorecards (40-36, 40-36, and 38-37). Pagan kept his undefeated record intact as he improved to 6-0, 3 KOs. Galindo fell to 1-8. Pagan was the busier fighter who aggressively dictated the action. He outboxed Galindo and landed more power shots throughout the fight.

Heavily decorated amateur, Owen Minor (1-0, 1 KO) made his long-awaited professional heavyweight debut a successful one as he prevailed over Corey Morley via a third-round technical knockout. Referee, Jackie Morrella stopped the bout with forty-four seconds in the round after Morley complained (for the fourth time in the fight) of a low blow despite the fact that he was wearing his trunks really high and Minor’s punches were not close to being near Morley’s trunk line. Morley dropped to 0-3-1. The 2012 semifinalist of the National Golden Gloves Tournament of Champions, controlled this fight as he repeatedly punished Morley with several hard punches and stinging three, four punch combinations. Morley was extremely tired from the second-round on as he lay on the ropes and threw very few punches over the next round and a half.

“This was great. Fighting at home in front of my kids and friends and winning by knockout, it does not get better than that, so I am very happy,” said Minor. “It has been four-years since I fought, so there was some rust. It is just going to keep getting better.”

Edwin Rosado, and Carlos Marrero III fought an extremely competitive, entertaining, action-packed four-round lightweight bout in which Marrero prevailed via a unanimous decision on all three judges’ scorecards (40-36), although the bout was a bit closer than the scorecards indicated. Marrero connected on the better combinations and landed more punches, but Rosado connected on the harder shots. Marrero improved to 1-2-1. He is unbeaten in his last two bouts. Rosado dropped to 1-9-1, 1 KO.

Cruiserweight, Jake Paradise obtained his first professional victory (1-2, 1 KO) with a brutal second-round knockout over Francisco Artri Neto (0-3) via a hard right hook to the body. Neto immediately dropped to the canvas as referee, Morello quickly counted him out with forty-eight seconds in the round. Neto stayed motionless on the canvas for a couple of minutes before he got up on his own power. It was a wild first round. Neto knocked down Paradise with a right hook midway through the round. Paradise immediately got up and did not seem hurt, but Neto went on the attack and landed several unanswered punches. Paradise, however, weathered Neto’s offensive onslaught and turned it around as he landed several hard shots of his own. He knocked down Neto at the end of the first, but Morello ruled it was from a low blow.

Undefeated light heavyweight, Angel Camacho Jr. made a successfully returned to the ring after a three-year absent with a sixth-round unanimous decision (60-54, 59-55, and 59-55) over Larry “Slomoshun” Smith. Camacho upped his record to 16-0, 5 KOs. Smith, who took the fight on one week notice, fell to 10-40-1, 7 KOs. Camacho controlled every round as he outworked and out-landed Smith.

Anuel Rosa scored a third-round technical knockout victory over Danny Morales as referee, Morrella stopped the one-sided welterweight bout at two minutes and fifty-four seconds. Rosa dominated this fight as he landed whatever he wanted and staggered Morales on several occasions. Morales barely threw any punches, instead he was content to constantly cover up anytime Rosa threw a punch. Rosa knocked down Morales from a right hook to the body seconds before the end of the first-round. Rosa improved to 2-0, 2 KOs. Morales dropped to 0-8.