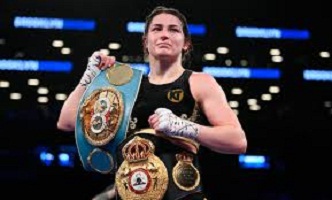 We knew going into her first last Friday that Katie Taylor wanted to pick up a third lightweight title, which she did with a dominant win over Rose Volante, and that after that, she really wanted to face WBC titleholder Delfine Persoon in a full 135-pound unification.

The target for that fight was the June 1 Joshua-Miller card at Madison Square Garden, and promoter Eddie Hearn confirms that’s still the idea.

“I believe we can, we can. June the 1st at Madison Square Garden on the Joshua card, what better setting for the undisputed lightweight title? … That undisputed fight means everything to (Taylor) and that fight is going to cement her legacy in the professional code.”

Ireland’s Taylor (13-0, 6 KO) has the IBF, WBA, and WBO titles, while Belgium’s Persoon (43-1, 18 KO) has the WBC belt, which she’s held for five years. Persoon also fought recently, stopping Melissa St. Vil after seven rounds on March 9, so the fighters are lined up perfectly to meet next.

If Taylor were to beat Persoon — which for once wouldn’t be any sort of lock going in — then there are other big fights for her on the horizon. Her team has expressed interest in facing the outstanding seven-weight world champion Amanda Serrano, as well as undisputed welterweight and pound-for-pound queen Cecilia Braekhus.